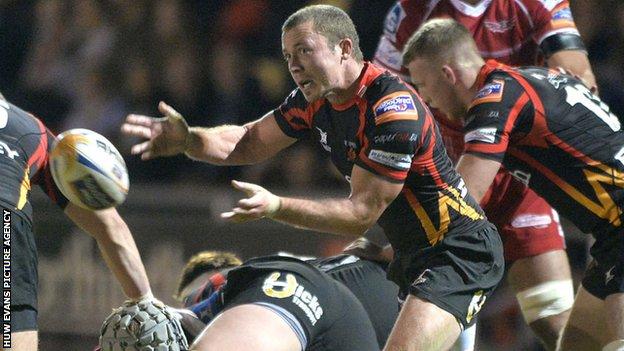 Coach Lyn Jones praised his experienced players after the Dragons' dramatic 23-16 win over the Scarlets in the Pro12.

It was the Dragons' first win in 11 attempts against the west Wales region.

And Jones, appointed head coach at the Gwent region last June, was delighted with the roles played by his senior players.

"Experience is a wonderful thing and Toby at eight, Richie Rees at nine and Jason Tovey at 10 they're experienced players," he said.

"So we're getting the balance right and it's important if we're going to achieve our goals then we need to achieve them on the back of victories.

"It makes life a lot easier for everybody. The challenge for us now is to go away and perform as well."

Dragons' next match is away to Munster, who were beaten 29-19 in Treviso on Friday.

The Welsh region have won two of their opening three league matches under Jones - and were only denied a draw in Edinburgh by a last-minute penalty in a 16-13 defeat.

Jones claims he is not concerned about who the Dragons are facing, only that they continue improving after finishing second from bottom last season.

"We are very pleased with the standard we're putting together," added Jones.

"We know we're not the complete side just yet and we won't be for a very long time, but we're starting to grow in belief and confidence and from that anything can grow.

"I'm not really interested in the opposition at the moment.

"I'm just interested in ourselves and making sure we can play really well and we can improve our game.

"There's still areas for us, our decision making on the ball and also there were one or two opportunities there where we could have taken that on. There were two on ones and we still went to a kick.

"It's just about growing in confidence - when to go, when to kick. It's only small things but that comes.