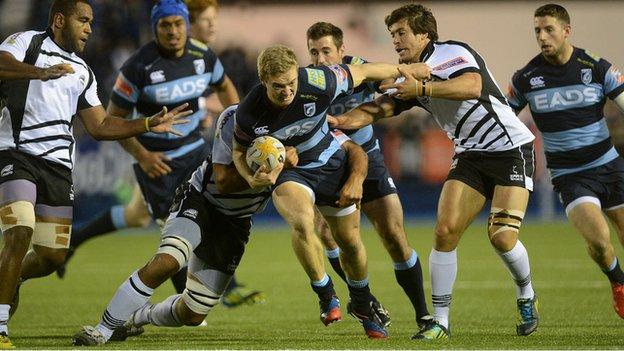 Former Wales international Jonathan Davies says Cardiff Blues must toughen up if they are to succeed in the Pro12.

Coach Phil Davies' side lost 30-25 to Zebre on Friday - the Italian club's first win in the competition, and the Blues' second defeat in three matches.

"That's just about attitude and application and I think that generally they're soft," he said.

"They're soft on the field mentally and physically sometimes.

"I've seen a lot of instances when they go in to contact and they get turned over - they get hit in the tackle and they lose the ball.

"They're not functioning at the moment.

"They're not making the most of the players they have there. They don't have the right balance in midfield and there's a lot of onus on young Rhys Patchell.

"I looked at that game and the inside defence was so lazy.

"I remember I highlighted this last year that when the ball has gone past, the inside defenders switch off, and the offensive team have an inside pass with a support runner but the defensive side hasn't."

Dual-code international Davies finished his career with Cardiff RFC after returning to rugby union from rugby league and played in the first Heineken Cup final against Toulouse in 1996.

Cardiff RFC was succeeded by the Cardiff Blues when the big Welsh clubs gave way to regional sides in 2003.

The team that lost to Zebre contained a total of 11 international players and two British and Irish Lions in the shape of Leigh Halfpenny and Alex Cuthbert.

Davies believes the Blues have to better utilise their best players and need some of their more experienced forwards to take a lead.

"In the backline the creativity isn't there. You need to get the ball into the hands of someone like Cuthbert," added Davies.

"He's a strong runner but he's not being used in midfield. And you need to get Leigh Halfpenny more involved.

"To do that you have to get your ball carriers carrying in midfield and dominating the breakdowns.

"You can do everything in place in training, all different structures and plays, but when it comes down to it on the field it's attitude of mind.

"I think senior players like Matthew Rees and Gethin Jenkins will have a big influence. Those people have to be more vocal.

"They've got to be cut-throat; you've got to win games and to win them you have to play at your best all the time."