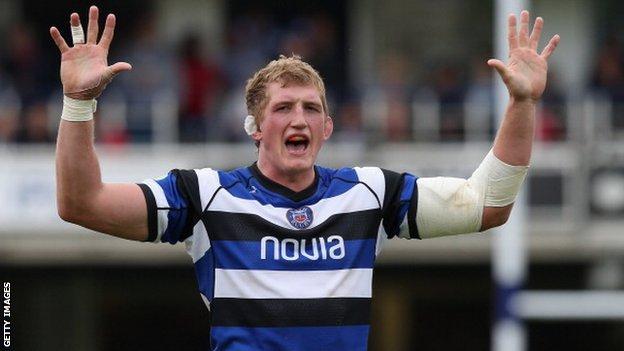 Bath lost 31-17 at Saracens on Sunday, with a much-changed side conceding all their points in the first half.

Hooper said: "You can't play the same guys for 32 games and expect to get a result in every game.

"We've just got to make sure the guys who get picked for the team, whoever it is, step up and do what we've said in training."

Bath won their opening two games of the Premiership campaign, against Newcastle and Leicester, before making six changes for the trip to Saracens.

Hooper told BBC Radio Bristol: "It's such a long season, there are going to be matches where there are lots of changes.

"If we want to be a championship team we've got to dominate from minute one to 80. We'll take the Saracens loss on the chin but it's a tough one.

"We've got a decent group of players here and I think there will be a reaction next week at The Rec."

Bath head coach Mike Ford also expects a fiery response from his side when London Irish visit on Saturday.

"Our fans will be disappointed but so we are we. But we will regroup and come out better against Irish," he said.

"We want to be coming to places like Saracens and for it be the norm that we expect to win, but mentally we are not there yet. We don't believe we can win at these places.

"It's a journey we're on and it's quite a young side out there and we have to go through lessons like this to make sure we get that experience."