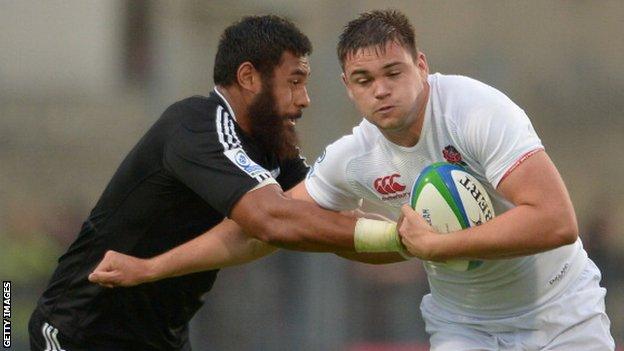 "Elliott has just come off the back of playing in the U20s World Cup and I thought he was absolutely outstanding," Davies told BBC Radio Gloucestershire.

"For a young man playing his first game in the Premiership against one of the top teams, he stood out."

I'll keep working hard and if I keep getting my chances I'll keep taking them.

The 20-year-old made his debut for Gloucester as a replacement at Mont-de-Marsan in the European Challenge Cup last October, and came off the bench in Gloucester's opening two games of the current Premiership campaign.

It has been a rapid rise for the Hartpury College student, who was watching Gloucester from the Kingsholm terraces until recently.

Describing the moment he scored in his maiden start for the Cherry and Whites, Stooke said: "James Simpson-Daniel took the tackle and took the pressure off me and I just flopped over the line. I couldn't believe it.

"I've watched a couple of seasons standing in The Shed with my mum, and having my mother and father behind me on Saturday was unbelievable. I loved every minute of it.

"It's a massive step up. I've done nothing like that before. I can't wait until the next opportunity, if it comes around.

"I'll keep working hard and if I keep getting my chances I'll keep taking them."

Stooke said the Gloucester forwards' performance against Northampton was the perfect riposte to early-season criticism.

"The pack has taken a lot of stick for the past couple of weeks for not being up to standard but we showed what we are about and that we can fight until the very end," he said.