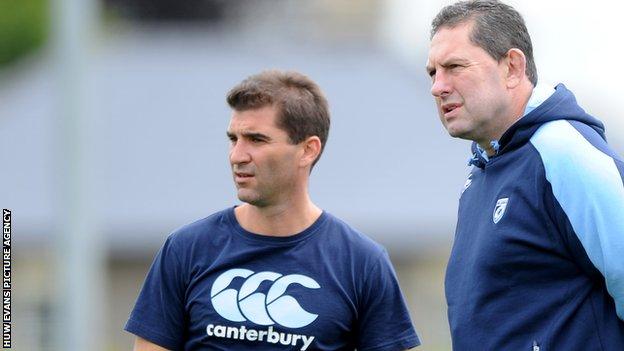 Cardiff Blues have announced that backs/attack coach Gareth Baber will leave them at the end of 2013.

Baber joined the Blues during former coach Dai Young's reign, which ended in June 2011 with his move to Wasps.

Baber alongside Justin Burnell before Phil Davies took over as director of rugby in May 2012.

Ex-Wales Sevens coach Baber, 41, is to take a head coach position overseas. "I see it as a progression for me in terms of the job specification," said Baber.

"It's a good challenge to add to my skills as a coach and I thank Cardiff Blues for their understanding and support with this."

A Blues statement said Baber has made "a massive impact as part of the coaching team at the region over the last seven years... initially joining the academy set-up following his retirement from playing in 2007".

Baber played scrum-half for Cardiff, Llanelli, Aberavon, Bristol, Pontypridd and Newport Gwent Dragons and has been a Wales Under-20 assistant coach.

"I am now focused on the rest of the year at Blues."