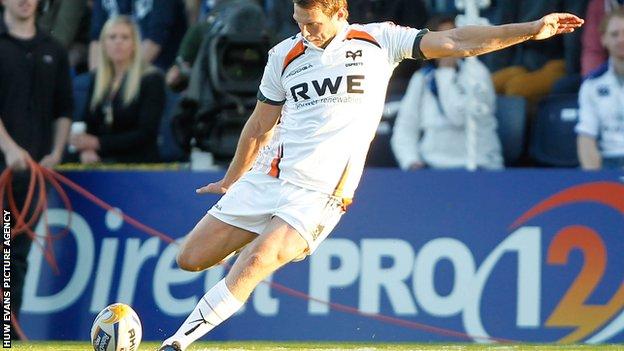 Fly-half Dan Biggar passed the 1,000 points mark in the Pro12 in the Ospreys' bonus-point win over Connacht.

The Wales stand-off claimed a personal tally of 18 points and scored one of the Ospreys' six tries Sportsground in Galway.

Wing Danie Poolman and centre Eion Griffin scored tries for the home side.

Biggar played a key role as the Ospreys maintained their unbeaten start in the league and moved into second in the Pro12 table.

But it was the Ospreys pack, full of British and Irish Lions, which laid a powerful platform for the former champions against the Irish province.

The visitors scored three tries in the opening 29 minutes, including an intercept effort from Biggar, with young out-half Craig Ronaldson keeping Connacht in touch at 22-12 down at half-time.

Fussell crossed for the Ospreys' second try after some impressive work from the visitors, with lock Ian Evans and returning flanker Justin Tipuric prominent in the build-up.

Wing Poolman crossed for Connacht's opening try and centre Griffin added a second after the break before the Ospreys replied with tries from Tebaldi, Hassler and captain Jones.

The Ospreys' Italian scrum-half Tebaldi sold a couple of dummies to grab a soft try from Connacht's perspective and Biggar converted to make it 29-19.

The Welsh side then sealed the win with a spell of strong running and crisp passing that sent Canadian wing Hassler over for the clinching score in the 71st minute.

Biggar reached the 1,000-point mark by converting that try and he also converted Jones's try - the Ospreys' sixth - three minutes from time.