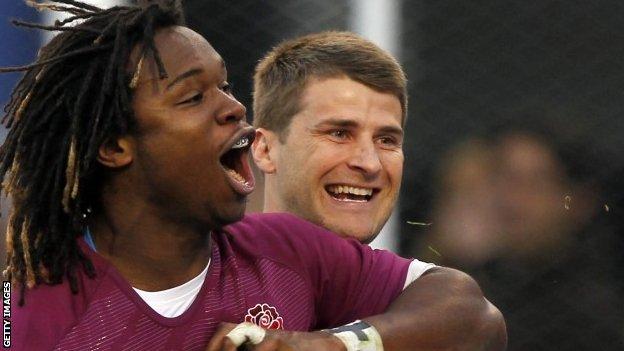 - The future of English and French clubs in European competition

- Who should play wing for England

Dear Jerry, do you believe the English and French clubs are purely driven by utter greed? Jack

Hi Jack, this is my short answer: no, I don't think the English and French clubs are being greedy in wanting to run and control what is essentially a provincial/regional/club competition. The European competition is great but the qualification and distribution of funds isn't fair or equal on a team-by-team basis.

ERC have been running it since it began and should have realised this would one day happen and made the changes necessary before this time, just as Uefa did.

I don't blame the clubs in France and England wanting to maximise the revenue they can generate because they have invested millions to keep the game sustainable in those countries. In England and France it has been the clubs that have supported the international game, not the other way round; they have developed and provided them with the players who represent France and England.

The club game in England and France has grown, the TV contracts negotiated have been pretty unbelievable considering where they were when the game went professional. That tells me they have a product in huge demand.

It's not been so much the same for the other teams in European competition because the Welsh, Irish and Scottish teams are funded by their unions. These unions see they could lose some control, but they needn't worry.

All they have to do is work with their regions and provinces to come up with the solution which shouldn't be hard, it is just a case of distributing the money fairly. The unions of course should receive some money because they provide the officials.

Hi Jerry, is Manu Tuilagi becoming the new Gavin Henson? Both (in their time) great centres on the pitch, and their behaviour questionable at best off the pitch. You can choose to see the funny side of what Tuilagi has done, but at the same time you can see the irresponsible side as well! Is there room in the game for characters such as these, or will it all end in tears for Tuilagi? Alan1104

Hi Alan1104, I really don't think Manu Tuilagi has any danger of grabbing headlines in the same way Gavin Henson has done in the past.

Tuilagi will be better known for what he does on the pitch rather than off it, that's my prediction.

Hi Jerry, I felt outraged at Kingsholm. Northampton were clearly denied the win at Gloucester. What is your opinion on this? JamesB

Hi JamesB; It's difficult to swallow as a player, coach and supporter when some refereeing decisions don't go the way of your team, particularly in a great game that goes right down to the wire as the Gloucester v Northampton game did.

The decisions made by the referee and his assistants after the re-start following Jamie Elliot's 78th-minute try were below satisfactory. They missed Gloucester players in front of the re-start and Ben Morgan appeared to let the ball out of the scrum that led to the penalty being awarded to Gloucester that Billy Twelvetrees knocked over to win the game.

You'd have to say the ref and his assistants got it wrong but we really do have to take a breath and step back, no matter how hard it is to take. As a former player you know some decisions are going to go against you and you will get some that you shouldn't have. That's the way it goes, you have to accept it or it eats away at you. The game is controlled by humans and the referees make errors of judgement, just as players and coaches do.

At the moment we seem to be concentrating on all the errors refs are making as if we are expecting them to be perfect. It's a tough job. We expect consistency but even that's hard to achieve because the refs all have different personalities, they're not robots thankfully.

With the amount of cameras at games these days, the referees are under the microscope. It is a difficult game to officiate sometimes because players make a lot of infringements. On the whole I believe referees do a good job. Unfortunately for them, the glaring misses do stand out.

Hi Jerry, do you agree that the criticism of referee Martin Fox is justified following his mistakes causing Gloucester to take the victory away from Northampton, as Gloucester players were clearly offside at the kick off? Or is the result fair as Gloucester had more possession and posed more of a try threat during the 80 minutes? Daniel Grimsey

Hi Daniel, it's fair to criticise Martin Fox and his assistants in a balanced way which is harder because over the entirety of the game they did a good job but their poor decisions stand out because of the consequences of those calls.

If you have the time to analyse a game, at most breakdowns there are infringements made by both teams that could be penalised. The referee is experienced enough to spot the obvious ones and generally gets it right. I look at a game like the Sliding Doors film.

You can't go back and say what if. You have to deal with the here and now and make the best of it. The best advice I've heard lately is a team should play the game in a manner that the ref can't ping you out of it.

I don't agree with you that Gloucester deserved to win because they had most of the possession or posed more of a threat. Saints will look back at all the turnovers they conceded and that's where they made it more difficult for themselves to win the game.

Hi Jerry, who would you pick on the England wings? Would you go for the boys scoring the tries in David Strettle and Marland Yarde, the workhorse in Chris Ashton, the man with the quickest feet in Christian Wade, or would you go for a sensible defensive option in Ugo Monye? Mr Ichallen

Hi Mr Ichallen. All of the names you mention are in with a very good shout. Chris Ashton has really knuckled down and got on with his business, I've been impressed with his work rate, although his defence (78% tackle success), still needs working on. Marland Yarde and David Strettle have scored four tries apiece in three games.

I still don't believe there is a better English support-running winger in the English game than Ashton and if England's game plan changes to wanting to score tries, then Ashton for me has to be in if his attitude is right.

I would go for Yarde on the other wing. I like his his raw ability. He's not programmed, he takes defenders on and wants to beat them, he wants to score tries. I'd ask Ashton to play left wing and after only three games these would be my two wingers for England.

Hi Jerry, do you agree that the Bath coaching panel have to take responsibility for the first half debacle against Saracens? The first two wins were based on the power of the pack, yet Paul James (replaced by a tight-head playing loose-head), Matt Garvey and Dave Attwood were left on the bench in such a crucial game, let alone George Ford and Jonathan Joseph, which handed the initiative straight to the opposition. rellis

Hi rellis, I thought Bath lost that game in the first half by losing the battle at the breakdown. They sent too many players into contact poorly supported and coughed up possession too easily, which meant they couldn't sustain any pressure on Sarries.

In that first half I watched Bath players carrying the ball into contact and knew Sarries were either going to jackal over the ball and slow it down, or turn it over because either there was little support or the Bath player wasn't running hard enough to bounce the defenders off.

I think the Bath players have to take responsibility for their performances, not so much the coaches who prepared them all week.

Hi Jerry, Zebre's win over Cardiff highlights the developmental value of the Pro12 and current Heineken set up, meaning Italy and in-turn the Six Nations and in turn the European international teams as a whole benefit. Will England and France realise this at some point and scrap their club-centric European abomination? Scott Hastings

Hi Scott. I, like you, really enjoy the Heineken Cup matches and Pro12 games but my argument would be the same as Harlequins director of rugby Conor O'Shea mentioned on a RTE programme recently.

Why shouldn't Zebre develop in their own class rather than deny a better team a place in the first tier of European competition? Let them work their way up, not by getting hammered every week, but by really competing against teams of similar ability in the second-tier European competition?

People are always afraid of change but they shouldn't be worried in this case. The new proposal will make every tier of European competition more competitive, thus making the international game in the northern hemisphere stronger.

Essentially we are only talking about changing how you qualify and who runs the competition. Every team will get equal share from revenue generated from TV income and sponsorship.

Hi Jerry, two great wins for the Italians, with Zebre defeating the Blues, and Treviso beating Munster. Having traditionally been the whipping boys at both Rabo & international level, it would seem this is no longer the case. Do you think the rise in standards of Italian rugby can be maintained, and if so, surely this will improve the standards of both the Rabo, and the Six Nations? Giraldus Cambrensis

Hi Giraldus, let's not get carried away with Zebre's win. Yes it was a great victory but only their first. Treviso have been improving. In their first season they finished 10th and last season seventh. Italy are proving they deserve their place in the Six Nations. They have beaten Scotland (six times), Wales (twice), France (twice) and Ireland for the first time this year, and nearly beaten England twice in Rome. I'm not sure about Zebre being competitive but Treviso are, definitely.

Hi Jerry, the top four in the Premiership is currently the same four as last season. Can you see it changing in the long run of the season? Jengibre

Hi Jengibre. If by the long run you mean this season, then I do believe Saracens, Northampton and Leicester will be there at the end, and fourth place will be between, Harlequins, Bath and Gloucester.

Hi Jerry, having watched Freddie Burns, Toby Flood and Owen Farrell all play pretty well this week, which one of them do you think has a tighter grip on the England 10 shirt for the autumn internationals at this stage? And do you think Burns at 10 and Farrell at 12 is a possibility in the absence of Brad Barrit? James_Hal

Hi James_Hal, I would like to see England go with Burns. I believe his running game would give England an attacking edge rather than Farrell or Flood.

I wouldn't pick Farrell at 12. There are too many better options in Billy Twelvetrees, Kyle Eastmond and Luther Burrell.

If it's not out there already I'm not about to throw myself under the bus?!