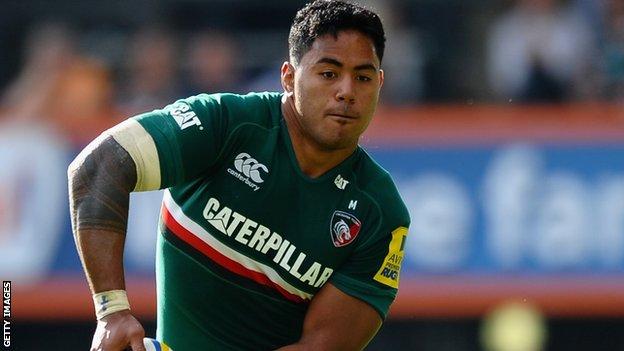 England and Leicester Tigers centre Manu Tuilagi could be out for two months with a torn pectoral muscle.

Tuilagi hurt his chest in Saturday's win over Newcastle but the club confirmed on Thursday that the player does not need surgery.

Director of rugby Richard Cockerill told BBC Radio Leicester: "It will certainly be weeks, potentially leading to months, rather than days."

The 22-year-old is now a major doubt for all of England's autumn Tests.

Australia, Argentina and New Zealand all visit Twickenham in November

"Until we know exactly what the damage is, it is hard to tell how long it will be," Cockerill added.

England have already lost Brad Barritt, Tuilagi's regular centre partner over the last year. The Saracens player has been ruled out after foot surgery.

Tuilagi has represented England on 21 occasions since making his debut against Wales in August 2011 and featured in the final Lions Test against Australia this summer as a replacement.

Earlier this month, he apologised for playing a prank on Prime Minister David Cameron when the Lions squad visited Downing Street.

Tuilagi, who signed a new long-term contract with Premiership champions Leicester in May, made a 'bunny' gesture with two fingers behind Cameron's head while posing for a photograph.