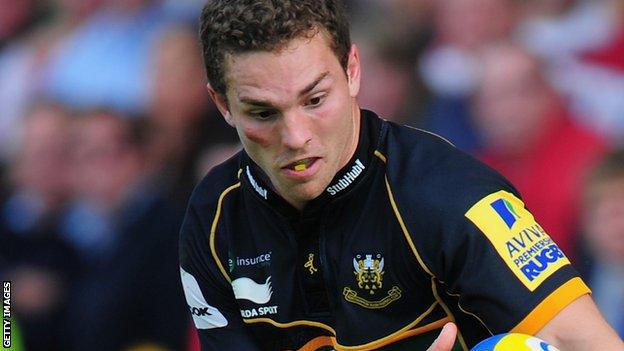 Northampton wing George North says he is "learning quickly" but needs time to reach his full potential with the club.

The 21-year-old set up the third try against Gloucester but is yet to score himself in three matches.

North told BBC Radio Northampton: "The expectation levels are part and parcel of the game.

"It's a new club with a new game plan. But every game, I'm getting more aware of where I need to be and getting into positions where I can be effective."

Hopefully we can open up and really attack because it's definitely a backline capable of winning things. You've got a mixture of all skills

He continued: "It's a whole new place with new people.

"The boys have been great but it'll take a while to get into the swing of things. I'm already feeling part of the club - it's just about knowing our game plan a bit better.

"I'm learning quickly but we're only three games into a long season. I've just got to give myself a bit more time to settle in."

The Wales international arrived at Franklin's Gardens having enjoyed an eye-catching tour of Australia with the British and Irish Lions, scoring two tries in three Tests.

He had previously played all his club rugby for Scarlets in Llanelli.

"It's very similar [in Northampton] to Llanelli because rugby is the one and only," he said. "It's a nice feeling to have the support of the whole town."

Saints have started the season with two wins and a narrow defeat by Gloucester, and North hopes they can continue to show a variety in their play that will enable him to get involved more.

"I'm interested in the mix," he stated. "The power up front but also that freedom to play. With [backs coach] Alex King here, we can really throw the ball around. You've seen that in glimpses but hopefully there will be a bit more development on that in the next few games.

"Hopefully we can open up and really attack because it's definitely a backline capable of winning things. You've got a mixture of all skills."