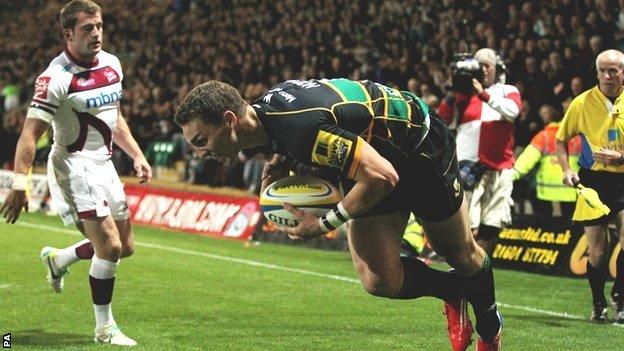 George North scored his first try for Northampton as Saints beat Sale to draw level with Saracens at the top of the early season Premiership table.

The Lions winger ran in the second of the Saints' five tries, with Luther Burrell, George Pisi, Lee Dickson and Phil Dowson also touching down.

Stephen Myler kicked four conversions for the hosts, who saw Calum Clark given the game's only yellow card.

Mark Cueto and Marc Jones each scored a converted try for the Sharks.

Northampton opened the scoring with their first visit to the 22, Dylan Hartley softening up the Sharks defence before Burrell scythed through from 10 metres out.

Myler, in his 200th game for Northampton, duly knocked over the conversion.

North then finally got on the scoresheet for the first time since his close season move from Scarlets - and it was one of the easiest of his career.

Sustained pressure saw Jamie Elliott get within inches of the line before he popped up an offload for the big Welshman to touch down in the left corner.

It was already looking like a routine win for Northampton, their third try coming after 30 minutes when Dickson ran round on the loop from a line-out and spotted a big gap before offloading for Pisi to dive between the posts, Myler this time adding the extras.

Saints were putting in some big hits in defence, but Danny Cipriani managed to offload while being poleaxed by Burrell and, as Sale homed in on the try-line, Clark was forced to kill the ball on the five-metre line. Referee David Rose showed no hesitation in producing the yellow card.

George North has got scoring his first try out of the way now. He is taking his time, settling in and playing well

With time up in the half, Cueto finally made Sale's extra man and intense pressure tell as he cut back on a hard line and blasted past two tacklers to score. Cipriani converted to make it 19-7 at the break.

Cipriani missed a relatively simple penalty while Clark was still off the pitch but, with their full complement of players back on the field, Northampton sealed the bonus point try.

The hosts smashed their way up to the Sale try-line and Dickson, who was outstanding in front of England coaches Andy Farrell and Graham Rowntree, faked a pass to Burrell before squirming over.

Dowson then scored Northampton's fifth after a fantastic break from number eight Sam Dickinson, who seared through the white line and sidestepped a tackler before offloading. A couple of passes later and Dowson twisted over.

In the final minute Sale earned some compensation with a line-out drive handing Jones a try and Ford adding the conversion.

"George North has got scoring his first try out of the way now. He is taking his time, settling in and playing well.

"As a team we were outstanding at times. Some of our attacking play and tempo was very good.

"I thought the energy from Lee Dickson was absolutely fantastic. He was the heart and soul of our side tonight."

"We were beaten by a better team. They got a 19-point lead and we couldn't compete with them.

"We managed to sort our set-piece out and compete in that area, but we made a couple of field position errors in the first half and they capitalised on it.

"It is easy to stick the cue back in the rack in games like this but we kept going and I was pleased with quite a lot of it to be honest."