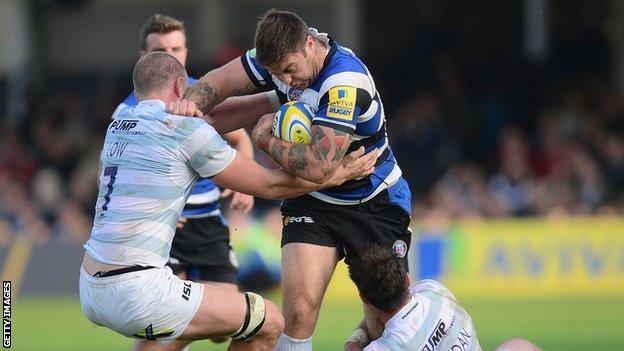 Bath made it three wins from their first four Premiership outings with a routine home win against London Irish.

The hosts claimed a bonus point within 34 minutes, with Jonathan Joseph, Guy Mercer (2), George Ford and Rob Webber all crossing in the first half.

But they were unable to add any further scores in the second period.

Shane Geraghty scored all 18 points for the visitors, including two tries, but the Exiles could not close the deficit enough to force a losing bonus point.

Back to haunt the Exiles

England international Jonathan Joseph has scored tries on his first two home appearances for Bath, including one against London Irish - the club he left in the summer - on Saturday

Much is expected of director of rugby Gary Gold's young Bath side this season and while a dominant first-half display showed their obvious promise, their failure to register a single point in the second 40 minutes shows they are still some way off the finished article.

However, they had done all of the hard work early on to ensure this game was over as a contest before the break, even recovering from the losses of captain Dave Attwood and full-back Anthony Watson to rib and muscle injuries respectively in the opening quarter.

England centre Joseph, who left London Irish for Bath in the summer, barged past Geraghty's tackle to cross against his former club.

Ford set up flanker Mercer for the first of his two tries from a quick line-out, before the former Leicester Tigers man ran from inside his own half to add a score of his own.

Geraghty got the better of Ford to score the first of his brace of tries, but Irish suffered another blow when hooker David Paice was sent to the sin bin on the stroke of half-time for retaliation.

Prop Jamie Hagan received the same punishment for not binding on the hour mark, but the Exiles - who gave a debut to Wales international second-row forward Ian Gough from the bench - were much more competitive after the restart despite being down to 14 men for much of the second half.

They were rewarded for their efforts when Geraghty took advantage of a rebound to touch down, but the visitors never looked like mounting an unlikely comeback.

"We were very good in the first half. We came out and put last week's defeat at Saracens to bed very early in the game.

"To score five tries in one half is pretty good. The second half was a bit scrappy from us, from the ruck area and from decisions, but we ride with it. We are very pleased with the five-point win.

"It's very hard to keep up that intensity but we've got to learn to play the full 80 minutes. We can look at the second half but we need to get quickly on to the Sale game on Friday night.

"It's a quick turnaround and we've got a few injuries but we'll assess them and keep the players fresh."

"The second-half display was very pleasing. At half-time we didn't talk about winning - just about fight, character and dignity. And we did play with plenty of fight, pluck and courage in the second half.

"I don't question the commitment or character of our boys but the first 20 minutes of the game were a bit of a nightmare for us. It gave us a bit of a mountain to climb.

"George [Ford] is tearing up trees. England are very lucky to have him - he's a class act and it's nice to see him blossom."