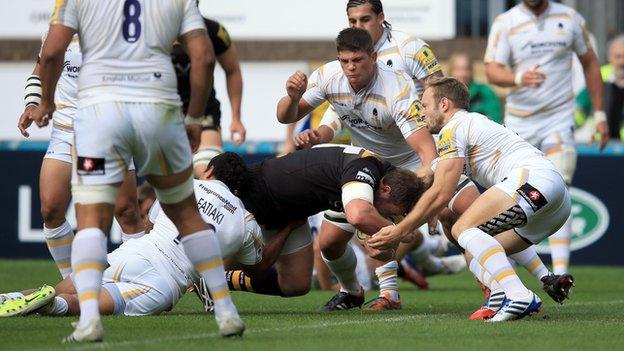 Winless Worcester slumped to a fourth straight defeat as Wasps romped to their first victory of the season.

All three Worcester old boys scored against the club they left this summer.

It is a huge challenge to get this club sorted out

Worcester are now the only team still without a win in this season's Premiership, Wasps having ended a run of 10 consecutive defeats since February.

And, had Goode not missed with all four conversion attempts, Worcester's defeat would have been even heavier.

Worcester, who trailed only 11-9 at the break thanks to three Ignacio Mieres penalties, were effectively buried by two Wasps tries inside eight minutes at the start of the second half, the home side adding a fourth for their bonus point when Hereford-born Thompson crossed late on.

George Porter made his first Warriors appearance in over nine months at loosehead, as coach Dean Ryan changed both props for the third successive match.

But he was forced to leave the field with a nasty head wound after just three minutes, as Ryan's reshuffling of his pack again failed to produce the goods.

After Worcester had won the early exchange of penalties, Ignacio Mieres' three successful kicks earning a 9-6 advantage at the end of a dreadful first quarter, Wasps regained the lead with the game's first try on 31 minutes.

The Warriors carelessly lost possession on halfway, allowing a Wasps counter-attack and, although Josh Bassett was hauled down just short of the line by Mieres, it could not stop Mullan crashing over from close range.

Ahead 11-9 at the break, in this season's first return to their Adams Park base, Wasps quickly stretched that lead with a fine try when number eight Nathan Hughes fed Charlie Davies and the scrum-half's well-judged kick was taken by Wade, who raced in to score.

Within three minutes, Wasps were over again. Johnson nicking a Worcester throw to burst away from a line-out and create a try for prop Cooper-Woolley.

With 15 minutes to go, Worcester finally scored when Drauniniu finished off some sustained pressure, converted by Danny Gray, a late first-half replacement for the injured Mieres.

But any hopes of a Worcester comeback were extinguished when Warriors replacement hooker Chris Brooker was yellow-carded, allowing Wasps to secure maximum points with a try from Thompson and Carlisle's late penalty.

"We have to put last year out of the window. We can't carry negativity forward as it is all about this year.

"Today we were in control for nearly all the game but I was frustrated that we didn't put distance between the teams earlier.

"Our scrum was a big factor. It provided a very strong foundation. We felt we had to work on our scrummaging and made it a big thing so as to change the perception of that part of our game."

"Our scrum didn't work and our line-out was sloppy. We were competitive in the first half but we were stripped of the ball on at least seven occasions and the scoreline kept flashing away from us.

"Matt Mullan got the better of Euan Murray in the scrum. Mullan was speedy across the gap but, as an experienced international, Euan should have been able to deal with it.

"It is a huge challenge to get this club sorted out. I'm very disappointed that we weren't competitive in the second half. Perhaps we need to more simplistic as we seem to be chasing games, too early and from too deep in our own half."