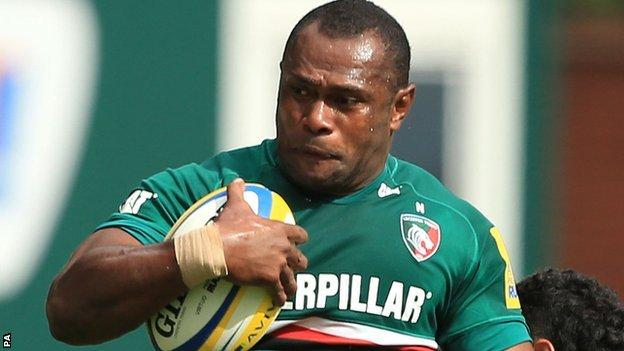 Defending champions Leicester moved level on points with second-placed Northampton after grinding out a 21-9 Premiership victory at Exeter.

Ben Youngs and Niki Goneva both touched down for the visitors in a one-sided first half at Sandy Park.

Captain Toby Flood kicked a conversion and three penalties for the Tigers.

Exeter fought back from a 15-0 deficit at half-time but three Gareth Steenson penalties were all the home team had to show for their efforts.

Leicester climb above Bath into third position in the table and trail unbeaten leaders Saracens by four points, while Exeter's inconsistent start to the campaign continues.

Richard Cockerill's men, who had dominated the first 40 minutes with an effective display against a Chiefs side that struggled to show any form until after the interval.

Tigers have the edge

Exeter and Leicester have played each other seven times in the Premiership since the Chiefs were promoted to the top flight in 2010.

Rob Baxter's side did the double over the Tigers in the 2011-12 season, but Leicester have won the other five meetings.

The Tigers had already wasted two scoring opportunities - full-back Niall Morris failing to ground Flood's chipped kick and then Flood missing a routine penalty - before the visitors finally registered their first points of the game on 11 minutes.

England and Lions hooker Tom Youngs twisted away from the back of a maul and fed younger brother Ben, who exploited a gap on the blind side to cross.

Flood was again wayward from the conversion but found his range to add a penalty soon afterwards.

The visitors were made to wait until a minute before the interval to add their second try, which came courtesy of Fiji international Goneva.

Switched from the wing to the centre due to the absence of Goneva intercepted a misplaced pass on half-way and cruised clear of the home defence for his third try of the season.

Given their 15-point lead at half-time, many would have expected Leicester to close out an easy victory but Exeter were much improved after the break and forced two early penalties, both kicked by fly-half Steenson.

The second took him beyond 500 Premiership points, and the gap between the sides was closed to six when Leicester were penalised at the scrum and Steenson slotted over the resulting penalty from close range, although Flood responded almost immediately with a three-pointer of his own.

Despite the odd moment of alarm, Leicester held firm to clinch a third win in four Premiership matches, with captain Flood's fourth successful kick adding some gloss to the final scoreline.

"That is as disappointing a showing in the first half that I can ever remember in the Premiership. I don't mind the wins and the losses as such. You deal with those as they are going to happen, but you have always got to fire some shots and give yourself a chance.

"I said to the guys at half-time that, if I was a supporter watching that, I would think we were afraid.

"When I say that, I don't mean afraid of the physical contest. I mean afraid to put ourselves out there and go for it.

"We showed in the second half how effective that can be, even against Leicester. The fact is we are sat here now disappointed not to have scored two or three tries with the pressure we had on their line.

"We have won the second half 9-6 and made it a real contest, but we have got what we deserved because of our first-half showing."

"It was an outstanding effort from our players because Exeter really came at us in the second half. They threw everything at us and not to concede a try today at Sandy Park was good.

"We felt that if we tied Exeter up at the start, got momentum and quietened the crowd down, we would get a foothold in the game. You play in the right areas, get field position, keep hold of the ball and recycle, you will get your rewards.

"I was disappointed that we allowed them to get back into the game in the second half.

"The scrum was a real force today and we got a lot of rewards out of it."