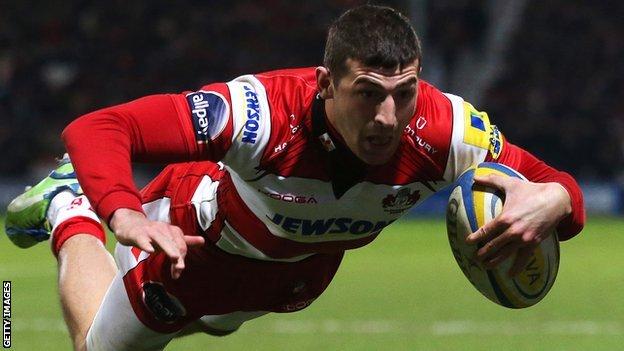 Gloucester fought back to secure a narrow victory over Newcastle.

Tom Catterick crossed in the first minute to give the Falcons an early advantage, and Rory Clegg converted before adding two more kicks.

The visitors responded with a try from Rob Cook and Freddie Burns' penalty to make it 13-8 at the break.

Burns kicked and Jonny May went over to give Gloucester the lead, and although Phil Godman's penalty levelled the score, Burns added two more to seal it.

The result ended the Cherry and Whites' six-year hoodoo at Kingston Park and it all came down to their second-half revival.

Newcastle crossed for the opening try of the game within 60 seconds, Ally Hogg releasing wing Catterick for a race to the whitewash.

Clegg added the extras in windy conditions and the fly-half added another three points after Gloucester were penalised at two consecutive scrums.

Burns opened the visitors' account with the boot but Newcastle's lead was soon back to 10 points as Clegg kicked his second penalty.

Gloucester reduced the deficit after Cook squeezed in at the corner, the try awarded by the TMO, although Burns missed the resulting conversion.

But they took control in the second half, and after Burns slotted a penalty, May was sent across the line for their second unconverted try.

Godman's penalty made is 16-16 with 20 minutes on the clock but England fly-half Burns kicked Gloucester to their second victory of the season.

Newcastle director of rugby Dean Richards: "We had a lot of possession we just didn't know how to use it. If you can't do that you will never win a game.

"That comes back to control and energy as well. Some of the boys aren't quite fit enough and a couple of the boys are carrying bugs from last week as well and we just need to make sure we look at ourselves in the eye and go out and train and play as we train."

Gloucester director of rugby Nigel Davies: "Newcastle came out really strong which we knew they would and they scored a well-worked try which added pressure to us.

"We managed the territory well in the second half.

"There was a strong wind which allowed us to do that and it's a frustrating place to be as I felt we created a lot of opportunities but we struggled to finish off and because of that Newcastle had a shot to come through at the end and get the result.

"They gave us a great game today."