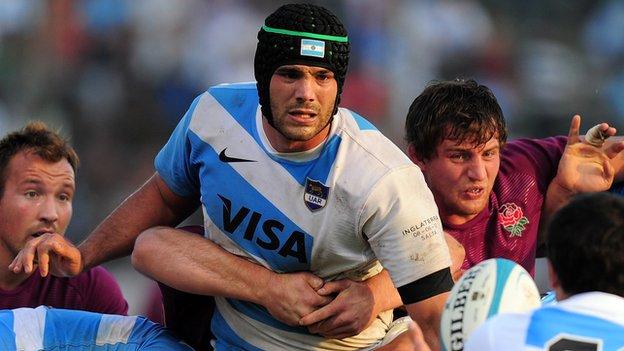 Worcester have responded to their poor start to the season by bolstering their pack with the signing of Argentina international Mariano Galarza.

The 6ft 8ins lock, who has been capped 18 times, is currently on duty for his country in the southern hemisphere Rugby Championship.

Once that ends on 5 October, he and fellow Argentines Agustin Creevy and Leonardo Senatore are due to arrive.

Former South African Under-20 wing Dean Hammond has also been signed up.

The 21-year-old, who featured for South Africa in the Under-20 World Championship in 2012, has impressed while on trial at Sixways, playing in two A League matches for the Warriors' second string.

"He's the sort of youngster that I want to be able to generate more of. We see him as a development project," said new Warriors director of rugby Dean Ryan, who is yet to see his team win since being appointed in May.

Meanwhile, the 29-year-old Galarza will complete a quartet of Argentines at Sixways, following the pre-planned signings made back in the spring by Ryan's predecessor Richard Hill of Montpellier hooker Creevy, Toulon back-row forward Senatore and Exeter stand-off Ignacio Mieres.

"We've all known each other for a few years and we know how each other play," said Galarza. "It will make us more confident.

"I played here for Argentina against Warriors in 2011 and I was impressed. It is a really good place."

Worcester's new Argentinean influence has already begun, Mieres having arrived in time for the start of the new campaign, in which he has so far landed nine kicks in three appearances in Worcester's losing start to the campaign.

The Warriors, who have not won away from Sixways since New Year's Day 2012, head for Adams Park this Saturday looking to get their season back on course against a Wasps side likely to contain three Worcester old boys; Andy Goode, Matt Mullan and Joe Carlisle.