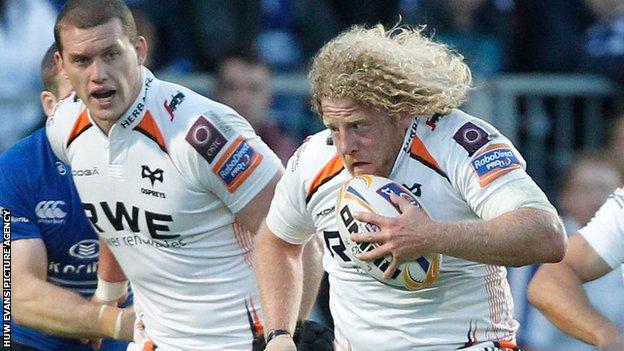 Former Wales prop Duncan Jones says the Ospreys' positive start to the Pro12 campaign is down to how poorly they began the 2012-13 season.

Last season the Ospreys lost all three of their opening matches and then failed to make the play-off finals.

In contrast, the Welsh region have had two wins and a draw at the start of this season.

"Last year sharpened the focus and the understanding how important it is to get off on the right foot," said Jones.

"Last year we were left a lot to chase. We have got a lot to work on but we are in a stronger position in terms of our league position than we were last year.

"We understand we can't rest there and we need to move their performance on."

It leaves the region second in the Pro12 table a point behind Glasgow Warriors before they take on Connacht at the Sportsground in Galway on Saturday.

Loose-head prop Jones understands that the Ospreys have been boosted by the return of their five British and Irish Lions - Alun Wyn Jones, Adam Jones, Richard Hibbard, Justin Tipuric and Ian Evans.

All five figured in the six-try victory over Edinburgh on Saturday.

But Jones believes it is the high standard the fringe players have set this season in readiness for the Lions' return.

"Our Lions are great characters. They are true Ospreys players - they have all been eager to get back and play for the team and that's testament to them," said Jones, who has been capped 57 times by Wales.

"[But] a lot of it is beneath with the younger players pushing the standards up.

"You can't have an off game at the Ospreys and it is a testament to those Lions boys that they still stay right at the top."