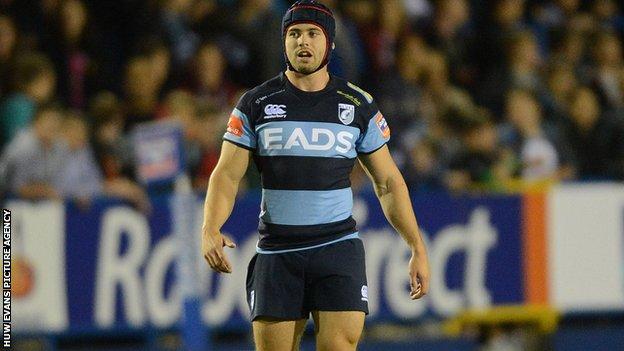 Leigh Halfpenny would be the ideal replacement for Jonny Wilkinson at Toulon in France, according to former Wales Grand Slam winner Tom Shanklin.

Reports in France have linked the Wales and Lions full-back with a move to the reigning Heineken Cup champions.

Halfpenny, 24, is out of contract with Cardiff Blues at the end of the season, with wealthy French clubs keen to recruit the prolific goal-kicker.

"There is possibly going to be a spot at Toulon, especially for a kicker which he is, because Jonny Wilkinson is leaving at the end of this season.

"He is possibly better than Wilkinson, he has a longer length.

"It will have a negative effect on the Blues because they are losing a quality player."

Halfpenny is one of the hottest properties in world rugby after his performances for Wales and the British and Irish Lions.

He was voted Player of the Six Nations as Wales defended their title earlier this year and named man of the series for his role in the Lions' 2-1 victory against Australia.

England World Cup winner Wilkinson, 34, is out of contract with Toulon, who he joined in 2009, at the end of this season and is expected to retire from rugby.

Shanklin says it is understandable that Toulon, one of the richest clubs in European rugby, would want to replace Wilkinson with a player of the calibre of Halfpenny.

Halfpenny is one of a batch of Welsh Lions, along with flanker Sam Warburton, prop Adam Jones, centre Jonathan Davies, and locks Ian Evans and Alun Wyn Jones, who are out of contract with their regions at the end of this season.

Reports in French rugby newspaper Midi Olympique stated Halfpenny would visit Toulon with his agent on Saturday to visit the club's facilities and discuss a potential contract after playing in the Blues' 34-20 defeat by Leinster in the Pro12 in Dublin on Friday.

But BBC Wales Sport understands Halfpenny has a clause in his contract which says he cannot speak to other clubs without the Blues' permission - unless it is within the final three months of his contract.

The Blues also confirmed Halfpenny would be flying back to Cardiff with the team on Friday night.