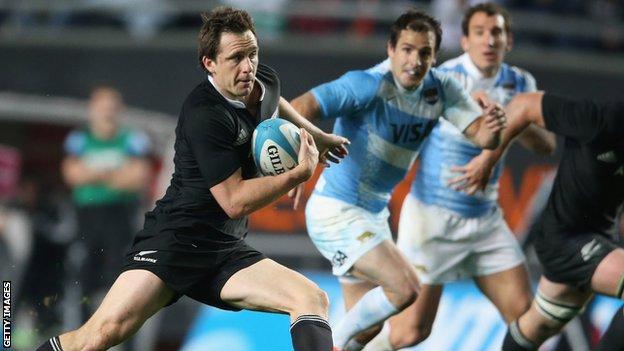 New Zealand closed in on the Rugby Championship trophy by beating Argentina 33-15 with a key bonus point.

The All Blacks head to Ellis Park next weekend for a finale against second-placed South Africa, who kept their title hopes alive with a 28-8 win over Australia.

New Zealand can triumph with a win, draw and even a narrow defeat.

The Springboks, meanwhile, will need a bonus point win by more than seven points to claim the trophy.

History, though, is not on their side. They have not beaten New Zealand with at least four tries for nine years.

New Zealand's crucial fourth try for the bonus point against Argentina came in the last seconds in La Plata.

Winger Ben Smith stepped one Pumas defender, avoided another, before diving between the posts for his second try of the match.

Argentina, still without a Championship victory since making their debut last year, started brightly by restricting New Zealand to just one try in the first half - Julian Savea bursting through to go over in the corner.

But the second half firmly belonged to the visitors. Flanker Sam Cane scored a deserved try down the left touchline before Smith beat full-back Juan Martin Hernandez for his first try of the match.

That made it 26-15 to New Zealand before Smith added the bonus point with a late dart over the line.

Earlier on Saturday, South Africa ensured the Rugby Championship went to the final game by beating Australia in Cape Town.

First-half tries from Adriaan Strauss and Zane Kirchner helped open up a commanding lead, before Willie Le Roux went over late on.

Fly-half Morne Steyn added three penalties and two conversions on his 50th appearance for the Springboks.

The Springboks looked set to take the extra bonus point with Strauss and Kirchner going over the line in the opening 15 minutes, but they struggled to build on a 23-3 lead at the break.

Australia have now lost four of their five matches in the competition and were always second best.

Christian Lealiifano had given the Wallabies short-lived hope by opening the scoring with a penalty. But they were unable to add to that until Chris Feauai-Sautia grabbed a consolation try with three minutes to go.