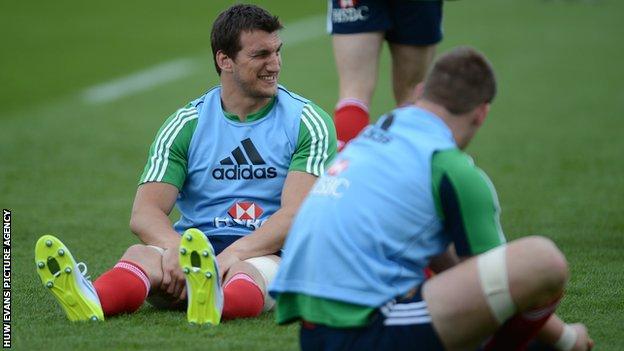 Sam Warburton's future at Cardiff Blues has been left in limbo by the row engulfing European rugby, according to the flanker's agent Derwyn Jones.

The British and Irish Lions and Wales captain, 24, is out of contract with the Blues at the end of the season.

But Jones, a former Wales lock, says the region have not been able to make a new offer as their budget is uncertain.

"Sam Warburton has told Cardiff Blues that he wants to stay in Wales next season," Jones told Y Clwb Rygbi.

"But the region aren't able to offer him a contract at the moment because of the mess that exists in Europe.

"They don't know how much money they will have next year."

English and French clubs have put in place plans to quit the Heineken Cup next year and have proposed the rival Rugby Champions Cup.

The Aviva Premiership and French Top 14 clubs believe the current European structure favours teams from the Pro12 - made up of sides from Wales, Scotland, Ireland and Italy - both in terms of qualification and in their share of revenue.

The Pro12 sides, or at least a reduced number, will be allowed to join the potential new tournament, but participation by teams could yet be vetoed by each nation's governing union and the International Rugby Board.

The financial planning in Wales is complicated further by a proposed extra pot of £1m on offer from the Welsh Rugby Union (WRU).

That sum has been earmarked for the four regions, but the Blues, Dragons, Ospreys and Scarlets do not yet know how the money will be shared and whether there will be any limit on what it can be spent on.

"Five weeks ago we said to the WRU and Cardiff Blues that Warburton wants to stay in Wales, but there is no contract offer on the table because of what is happening in Europe," Jones said.

"There is only so much time that guys like Warburton, Leigh Halfpenny and Adam Jones can wait until there is a contract offer, so the WRU and the regions must get together and do whatever they can for the good of Welsh rugby.

"[There must not be] the kind of power struggle that has gone on in the past [between the WRU and the regions] and they must do it now.

"If they don't do it now then these players will be going."

Warburton's Blues, Wales and Lions team-mate Halfpenny is also out of contract at the end of the season and has been

Ospreys, Wales and Lions tight-head prop Jones said in August he when his current regional deal expires in the summer.

All the Welsh regions have seen top players leave for richer French and English clubs in recent seasons and they would like to stem departures.