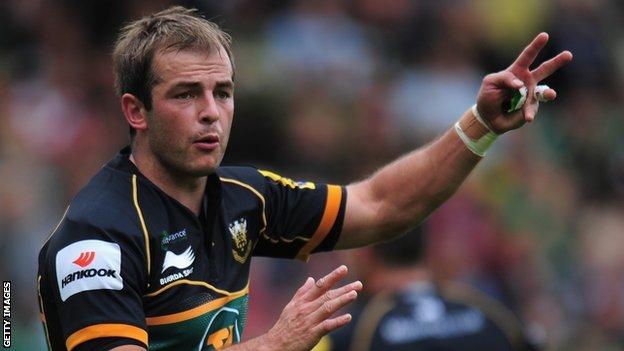 Northampton Saints fly-half Stephen Myler has thanked the club for standing by him after making his 200th appearance in Friday's win over Sale.

The 29-year-old cemented his place as Jim Mallinder's preferred number 10 at the back end of last term as they lost to Leicester in the Premiership final.

"It is nice to know you're not constantly looking over your shoulder," he told BBC Radio Northampton.

"I'm really happy I'm still here. The club's been really good to me."

Myler is in his eighth campaign at Franklins Gardens and his 38 points this season have taken his overall Saints tally to 1,544.

But he has had to see off competition from Ryan Lamb and Shane Geraghty - who left this year and last respectively - to be the club's recognised man at 10.

"It's always nice to have the backing of your coaches," said Myler, a one-time England cap.

"But in the same breath Jim has never hidden anything from myself or Shane or Ryan when they were here. He basically said whoever is playing the best will have the shirt in the big games.

"The key is to focus on doing things well rather than not doing something wrong, which the team is doing at the moment."

Myler's 200th appearance was supplemented by eight points that kept Saints second in the Premiership, four points behind Saracens.

"It is a big achievement and it's something I'm very proud of. But it's not the thing you're focused on the most," he said.

"I was more concerned with getting the right result to get us back up the table. Although it is a pleasing milestone to reach."