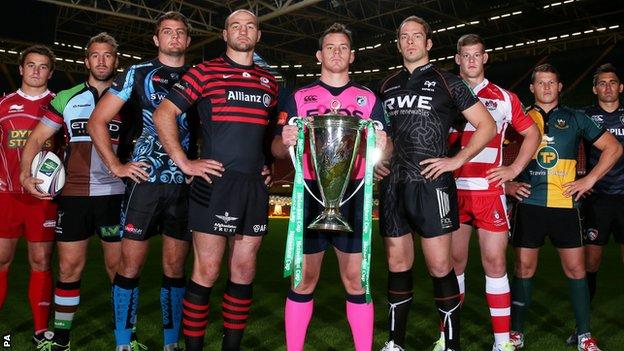 The "door is still open" for Europe's top clubs to help find a solution to the row over the Heineken Cup's future, says the competition's organiser.

English and French clubs will quit the tournament next year in favour of the proposed Rugby Champions Cup.

European Rugby Cup (ERC), which has run the Heineken Cup since it began in 1995, wants to reopen talks with clubs.

"The future is best served by doing what we have all been doing for 18 years," said ERC chief Derek McGrath.

"ERC wishes to encourage everybody back to the table. There is a lot of activity to try to find solutions.

"We have stated many times that we absolutely believe that we will only find agreement when we have the full engagement of all the parties around the table. We haven't had that yet.

English Premiership and French Top 14 clubs are serving a notice period to leave ERC-run competitions and will not attend talks planned by the organising body next month.

They believe the Heineken Cup structure favours teams from the Pro12, which is made up of sides from Wales, Scotland, Ireland and Italy.

Only the top six in England and France are guaranteed a place in the Heineken Cup, whereas at least 10 Celtic League outfits - including both Scottish, both Italian and a minimum of three sides each from Wales and Ireland - have certain entry into the competition.

With the Pro12 having no relegation, it is argued teams can rest players for league matches to keep them fresh for Europe, while Premiership and Top 14 teams have to fight hard just to qualify.

The English and French clubs are also unhappy with the way revenues are split between the three leagues and want to keep a greater share.

Pro12 clubs will be allowed to join the potential new tournament, but the Welsh, Scottish and Irish Rugby Unions want "full approval" of the International Rugby Board (IRB) for their clubs to take part.

Despite the English and French clubs' insistence on forming a breakaway competition, ERC chief executive McGrath insists there is still time to reach an agreement for all of Europe's top clubs to continue playing in the Heineken Cup.

"All parties bear a responsibility to find those solutions," he added at Monday's English and French launch of this season's Heineken and Amlin Challenge Cup competitions in Cardiff.

"Walking away is not respecting the obligations to those, in particular, who are not sitting at the table - the fans, the players, the sponsors - who have a significant interest in the future of the competitions.

"I sincerely believe it is in everyone's best interests to come to the meeting."