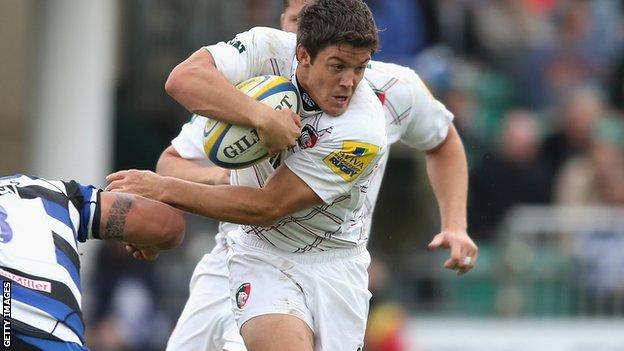 Twice-capped Allen, 27, played against New Zealand and Argentina in 2006.

But Burke feels the ex-Gloucester back is a ready-made replacement for the injured pair of Tigers team-mate Manu Tuilagi and Saracens' Brad Barritt for next months's autumn internationals.

"It is a travesty he only has two caps," Burke told BBC Radio Leicester.

If I keep playing well, I'll take that to the selectors and they will watch my game

"For me, week-in-and-week-out he is the most consistent number 12 in the game.

"Anthony has been the ultimate professional on and off the field - exceptional since his arrival from Gloucester.

"If they overlook Anthony, it's our gain isn't it? But he is there or thereabouts, and I hope he is being talked about by the selectors."

Allen, who joined Tigers in 2009, made his 100th start for the East Midlands club in Sunday's 21-9 win over Exeter, has played in four consecutive Premiership finals and claimed man-of-the-match honours as they beat Northampton at Twickenham to take the title in May.

But he missed England's summer tour of Argentina because of a knee operation and refused to get carried away with talk of international selection.

"I just have to concentrate on the next month or so with Leicester and you never know," Allen said.

"It's happened to me in the past. I was playing well, then got an injury at the end of last year and missed the tour.

"If I keep playing well, I'll take that to the selectors and they will watch my game."