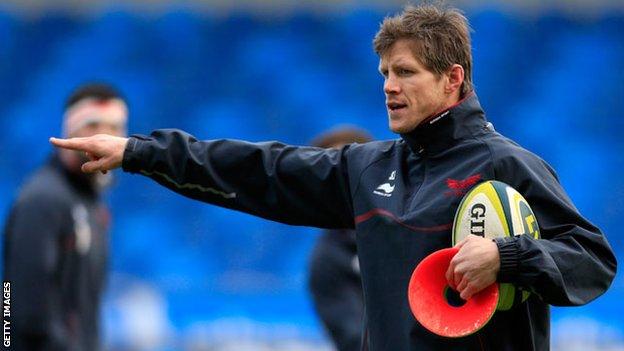 Uncertainty over the future of the Heineken Cup is hampering Welsh regions trying to keep top players in Wales.

Scarlets boss Simon Easterby and his Blues counterpart Phil Davies both claim worries over the tournament are complicating contract talks.

Blues Sam Warburton and Leigh Halfpenny and Scarlets captain Jonathan Davies are out of contract in 2014.

"It does not help for sure, the sooner this is resolved the better from our perspective," said Easterby.

English Premier League clubs and the top French clubs say they will not play in the Heineken Cup next season but are setting up a new tournament - The Rugby Champions' Cup - to start in the 2014-15 season.

They have invited Pro12 teams to join, but the Scottish, Welsh, and Irish rugby unions have all said they will block their teams playing in any cross-border tournament that is not sanctioned by the International Rugby Board.

It has left Easterby frustrated.

"It has gone on long enough and we want to talk about the rugby and the players we want to retain, rather than worrying whether they are going somewhere else," he said.

"Assuming we can resolve this and the sooner the WRU, who are acting on our behalf, resolve the matter with ERC and the other nations the sooner we can concentrate on keeping players and playing in this competition for many years to come."

The drain of international players from Wales has become a major concern for the Welsh Rugby Union and the regions.

Jamie Roberts, Dan Lydiate, Mike Phillips, James Hook and Luke Charteris are all playing in France, while George North made a high-profile move to Northampton during the summer.

In addition to the players at the Scarlets and the Blues, Ospreys have Lions Adam Jones, Alun Wyn Jones and Ian Evans out of contract at the end of this season.

Blues rugby director Davies said talks with Warburton and Halfpenny were ongoing, but uncertainty was complicating the talks.

"They are two world class players and they are attracting interest at the moment, as you would expect," he said.

"The administrators are quality guys and hopefully it will be put to bed as soon as possible.

"Our chief executive is working hard with their parties and we will see how that goes along."