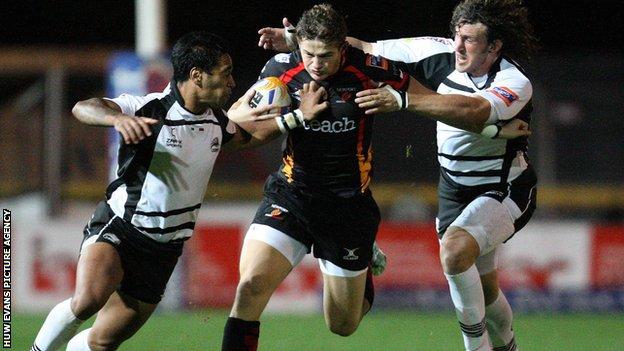 Amos, 18, scored a try in each half to make it three wins out of three for the Dragons at Rodney Parade in the Pro12 this season.

Flanker Lewis Evans also crossed for a try and fly-half Jason Tovey kicked the rest of the home side's points.

Wing Leonardo Sarto scored a try for the Italian outfit in the second half.

Tovey finished with 15 points and did not miss a kick all evening in another impressive display by the Men of Gwent.

The Dragons were boosted by the return of Wales and British and Irish Lions number eight Toby Faletau, who proved his undoubted quality against a Zebre side who had beaten Cardiff Blues and recorded their first Pro12 victory on their last trip to Wales.

It was Faletau's break from the back of a scrum from the halfway line which sparked the best try of the game, Amos' second.

The Wales international ran deep into his opponents' half, brushing off defenders before slipping the ball to Tovey, who delivered the pass to Amos for the youngster to finish off in the corner.

Italy international fly-half Luciano Orquera had given Zebre an early lead with a penalty, before Tovey struck with three successive penalties to give the home side an advantage they would not lose.

And Amos was on hand to score the first try of the game when the Dragons' dominance at the scrum proved too much for the visitors.

The hosts went in 16-0 ahead at half-time before Wales Under-20 international Amos crossed for his second try after Faletau's superb break, though Sarto grabbed a consolation try for Zebre.

Flanker Evans then took advantage of a dominant Dragons scrum to score his side's third try midway through the second half to secure the win and to make it five wins out of five against Italian sides since defeat by Treviso in December.