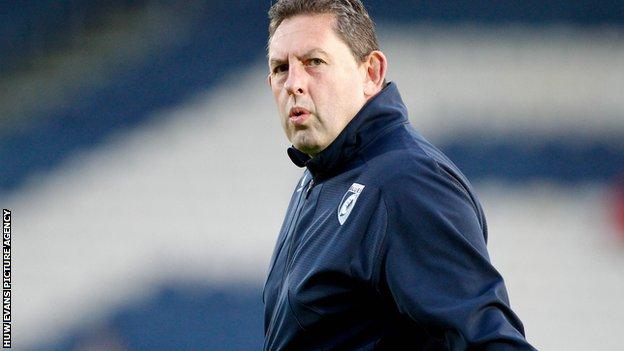 Cardiff Blues director of rugby Phil Davies is looking for an experienced attack coach to replace Gareth Baber at the Arms Park.

Baber, 41, has announced he will leave the region at the end of 2013 for a coaching position overseas.

And Davies wants an accomplished candidate to take charge of his young backline in the Welsh capital.

"We are looking for somebody who is experienced. I don't want an up-and-coming coach," he said.

"I want somebody who will come in here and really turn these boys on and grow and develop them further than they already have been."

Former Wales Sevens coach Baber joined the Blues during former coach Dai Young's reign, which ended in June 2011 with his move to Wasps. He continued alongside Justin Burnell before Davies took over as director of rugby in May 2012.

Shaun Edwards, the Wales defence coach, has been linked with a role at the Blues, but Davies is looking for an attack coach.

"Shaun has a full-time job and we have a defence coach in Rob Powell," he said.

But he did not rule out the possibility of Edwards being used by the Blues in the future.

"We have utilised the Wales coaches since I have been here - like Rob Howley, Robin McBryde and Neil Jenkins," Davies added.

"Shaun had other commitments with London Irish last year but, of course, we will try to utilise all available expertise.

"But we also have a process and a programme, from a coaching perspective, that we are delivering week in, week out here.

"We need to look at how we can improve, that is for sure, and from an attacking perspective we are looking at somebody who has the ability to bring the best out of these young backs and to provide technical coaching."