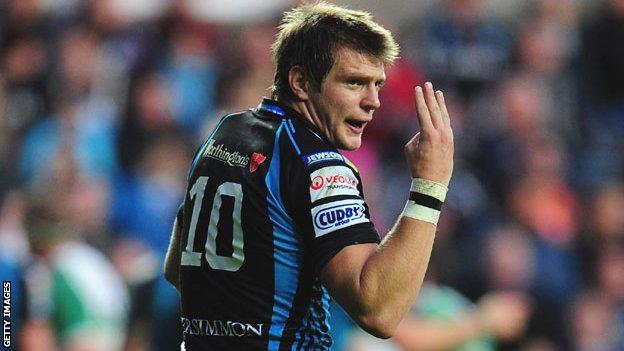 Fly-half Dan Biggar has paid tribute to the Ospreys pack after the team's flying start to the Pro12 season.

The Welsh region are second in the table after three wins and a draw in their opening four matches.

Biggar himself scored 18 points in their 26-43 win at Connacht to take his personal league tally to 1,003 points, but put his success down to the pack.

"There are five Lions series winners in there, it's a pleasure to play behind them," he said.

"You've got Alun Wyn [Jones] who in my opinion is one of the best players in the world at the moment and Ian Evans who is coming in to some great form.

"Justin Tipuric is one of the best players I've ever played with and then you've got Adam [Jones] and [Richard] Hibbard in the front row so they're always going to give you that solid set piece.

"So at the minute nine and ten have got a pretty decent ride and we're hoping that they continue that for the next few games."

In addition to the five forwards who toured with the British and Irish Lions in 2013, back rower Ryan Jones starred for the tourists in New Zealand in 2005.

Ospreys face Ulster at the Liberty Stadium on Friday, their last outing before starting their Heineken Cup campaign against Leinster in Swansea on 12 October.

Biggar says he was glad to pass the 1,000 point landmark, but is keen to ensure the Ospreys maintain their form against Ulster and into the Heineken Cup.

And he would rather not talk about the perennial Welsh obsession with who will play fly half for Wales in the autumn internationals.

Biggar held down the spot as Wales won the 2013 Six Nations following an injury to Rhys Priestland.

But with the Scarlets fly-half now recovered from his Achilles tendon injury and the emergence of Rhys Patchell at the Blues, the debate has re-ignited.

"People are always going to talk about the autumn internationals, and rightly so, but at the minute I'm just loving playing for this club," said Biggar.

"I'm really enjoying playing week-in, week-out, so if the form's good enough then you'll get selected.

"That's the way I've been looking at it for the last sort of year or two - it's something that is out of your hands and if your form is good then you'll be in.

"Rhys Priestland is playing well, he's got his confidence back and when Rhys is confident he's an exceptional player.

"Rhys Patchell's obviously got all the skills in the world. He's still learning the game a little bit but a real exciting prospect so competition is great.

"You don't want to be in the comfort zone you want to be pushed all the way."