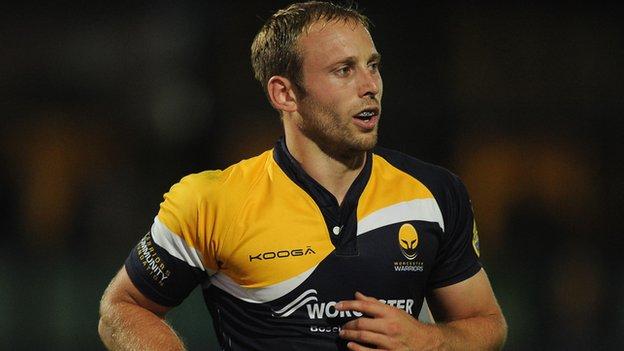 Worcester coach Dean Ryan claims in-form full-back Chris Pennell would be an England contender if he played for a top-six Premiership club.

Pennell has caught the eye this season, despite playing in a Warriors side who have lost their first four matches.

"If he was playing for a top-six side, it would be hard to ignore him," Ryan told BBC Hereford & Worcester.

"I think Mike Brown will get the Test start this autumn and I like him, but Chris has all the same attributes."

Apart from Harlequins full-back Brown and Alex Goode of Saracens, Ryan believes there are few other worthy contenders to wear the number 15 shirt for Stuart Lancaster's England in this autumn's internationals.

"Who else is better under the high ball? Apart from Brown and Goode, name another full-back in that sort of form," he said.

Since former England captain Pat Sanderson's 16-cap international career came to an end in 2007, Worcester have only twice had a player appear in the national team.

Prop Matt Mullan, now at Wasps, came off the bench in the Six Nations against Italy in Rome in 2010, and flanker Matt Kvesic, who moved to Gloucester this summer, made his international debut on England's summer tour of Argentina.

But the Worcester boss insists that their place at the foot of the Premiership should not detract from the chances of 26-year-old Pennell.

"Lancaster can't ignore him," said Ryan. "To be playing that well at a time when we're not firing on cylinders is all credit to him."

And Ryan is even more pleased that, at a time when he is ringing his changes in the pack every week, such consistent performances in the back-line should be coming from one of the club's academy products.

"He's ingrained in this club, having come through the academy and gone through some tough times with injuries," he added.

"He had chances to go two or three years ago but chose to stay - and that sums up the man.

"He's outstanding. A brilliant professional. One of those players who sets the bar."