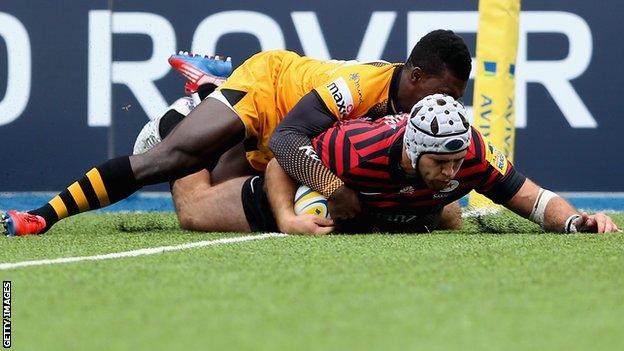 Premiership leaders Saracens maintained their 100% record, but were given a stern test by resilient Wasps.

The home side narrowly led at half-time through Alex Goode's penalty.

Will Fraser widened the deficit by touching down after the break, but Chris Bell struck back after great work from Christian Wade.

Saracens may have lacked the fluency that had seen them drop just one point from a possible 20 this season, but they were patient enough to break down a powerful Wasps side.

Dai Young's men held firm for long periods, and Goode's penalty aside, were rarely troubled by the Premiership's top team in the first half, even when forward Kearnan Myall was sin-binned for tackling Fraser off the ball.

And it was a half-time substitution that provided the spark for the home team when England fly-half Farrell, replacing Ben Ransom, fed Alex Goode, who released Fraser to cross in the corner with an impressive turn of pace.

Farrell kicked the extras and it seemed Wasps' hopes of registering their second win of the season, following last week's victory over Worcester, and inflicting a first regular-season defeat on Saracens at Allianz Park were diminishing.

But the impressive Launchbury linked with Wade, who superbly jinked through the home defence before managing to find Bell for a score in the corner.

Substitute Andy Goode missed the conversion and Farrell showed him how it should be done by landing a trio of efforts from the tee, but Wasps earned the bonus point they deserved by crossing at the death.

Saracens winger Chris Ashton saw yellow for a deliberate knock-on that denied Wasps a scoring opportunity, only for Bell to capitalise on the space for his second try before Goode converted.

"Sometimes you have to dig in. Everybody wants to see lots of tries but Wasps did a tremendous job today.

"They were good defensively, they get numbers in at the breakdown, they go for the ball hard and it was a terrific workout for us ahead of the Heineken Cup next week.

"We rolled up our sleeves and won comfortably in the end, it's job done."

"We deserved to get something out of it.

"Our accuracy with the ball wasn't good enough and we'll have to work hard at that because we are not giving ourselves enough of a chance to put teams under pressure."