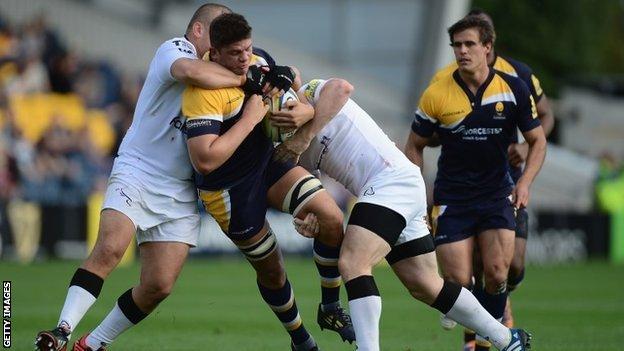 Worcester's worrying start to the season continued with defeat by newly promoted Newcastle at Sixways.

The Falcons went ahead via Rory Clegg's early penalty and Mike Blair added a try from their first real attack.

Despite Oliver Tomaszczyk's yellow card, Ignacio Mieres' penalty was all a home side looking low on confidence had to show for their first-half efforts.

Stretching back to the end of last season, Worcester's losing run now stands at 10 Premiership matches and they are yet to win under new head coach Dean Ryan,

Worcester chairman Cecil Duckworth said in the matchday programme that "this year we do not expect to be competitive against the top four or five teams" and the Warriors' display against a team unlikely to be part of that subset of the Premiership suggests he may have been somewhat generous in his assessment.

Clegg kicked a second-minute penalty to put Newcastle on the front foot and the Falcons took advantage with a powerful charge by lock Carlo Del Fava allowing Blair to pick up and score.

Another Clegg penalty put Newcastle 13-0 up as Worcester repeatedly kicked away possession through their half-backs, although Meires did finally get them on the scoreboard with a penalty after a spell of pressure.

More decent Worcester pressure followed, leading to a yellow card for prop Tomaszczyk but the hosts did not manage to take advantage of their numerical advantage with some poor decision making and a lack of willingness to go wide.

Mieres did kick a second penalty as Tomaszczyk rejoined the action, but for the most part the Falcons defence comfortably dealt with what came their way.

The defensive line was finally breached when diminutive winger Lemi got his hands to the ball in among a pile of forwards but with the clock ticking down, Newcastle promptly went back down the other end to earn a penalty which Godman converted.

Worcester mounted one final attack deep inside Newcastle territory, earning a kickable penalty. But, with five minutes left, and still time to get back within drop-goal range, the Warriors chose to take a tap penalty rather than go for goal, and the Falcons remained resilient to earn a crucial away win.