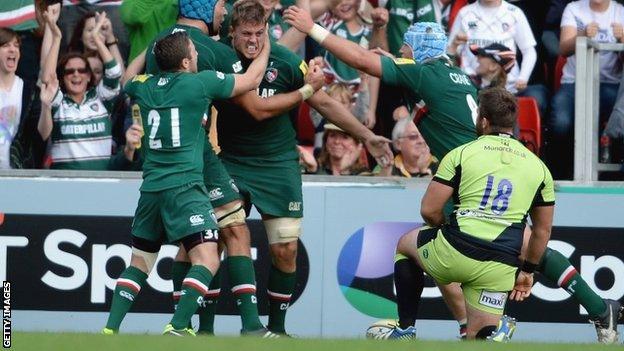 Northampton missed the chance of a rare victory at Welford Road as champions Leicester fought back to earn a draw.

Alex Corbisiero rumbled over from a yard out after a fine team attack to put the Saints into a deserved lead, while Sam Dickinson was held up.

Leicester belatedly went on the attack and Ed Slater powered over to allow Toby Flood to kick the conversion.

The Tigers could even have scraped the win in the dying seconds, but an attempted drop-goal from David Mele was charged down.

The tone for a physical encounter was set at the kick-off with Dickinson's challenge on Blaine Scully leaving the Tigers winger in a heap and requiring treatment for suspected concussion, while a huge surge from the Leicester pack at the resulting scrum also laid down a marker.

Myler made no mistake from halfway to put the Saints into an early lead before a yellow card for centre Burrell, who was adjudged to have made a dangerous tackle on opposite number Anthony Allen in midfield, gave Flood the chance to level the scores.

Two more Myler penalties put Northampton 9-6 up as they made light of Burrell's absence before Flood's second successful kick narrowed the gap, but Leicester were struggling to exert much by way of territorial pressure on the visitors.

The Saints were agonisingly close to a try only for Wales wing George North to knock on as he tried to get his 6ft 6ins frame down to a bouncing ball, but the narrow half-time advantage was no less than Northampton deserved.

The visitors remained in the ascendancy after the break as a box-kick from Lee Dickson set up an attack which saw the ball flow through numerous pairs of hands and phases before Corbisiero burrowed over from close range.

Leicester looked in serious danger of crumbling, with another barnstorming Saints attack only ending when Dickinson was held up over the line by three Tigers players, but that near miss seemed to be the catalyst for the hosts to finally find some form in attack.

A Flood break sparked the backline into action only for Jordan Crane's clumsy pass to end the move.

More and more pressure came on from the home side, but things seemed ominous when a breakaway Northampton attack resulted in Myler's fourth successful penalty.

After both sides went down to 14 men with yellow cards for Louis Deacon and Courtney Lawes, Leicester responded in familiar style, with Flood narrowing the gap with a penalty.

Northampton were unable to get their hands on the ball and it was no surprise when Slater ended another spell of concerted pressure by bursting over just to the right of the posts to give Flood the chance to level the scores.

"The frustration is there, for 65 minutes we played some lovely rugby probably we'll look back and I think if we'd have taken opportunities we would have got away from them and won the game.

"It's down to close calls we'll look at their line out on our line which they scored from which didn't look too straight to me, that's what happens in big derby games there is very close decision, you have to make sure you take opportunities when you get them.

"This is progress, we said before the game it won't be the be all and end all, we're not coming here to define the season but a win would have been very nice."