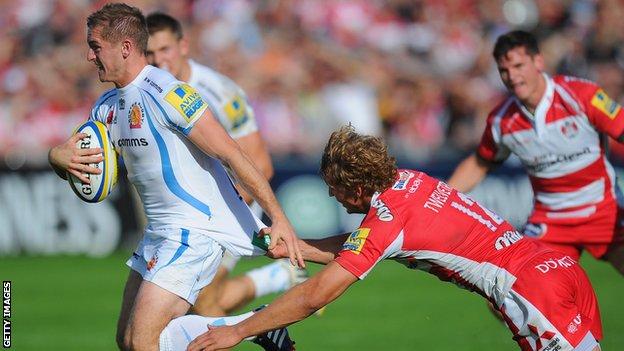 Exeter Chiefs leapfrogged opponents Gloucester in the Premiership after a well-drilled victory at Kingsholm.

Gareth Steenson kicked two penalties and a conversion to add to Ben White's try in the first half, with Martyn Thomas's try in reply for Gloucester.

Steenson kicked another penalty in the second half and Dean Mumm put the Chiefs further ahead with a try.

Our attitude was absolutely fantastic. It is all about attitude. If you get the attitude right, you can be a handful against any team

Sunday's result means Exeter are sixth, with Gloucester down to 10th.

Rob Baxter's Chiefs outmuscled a Gloucester outfit who had won their last two games in the Premiership, with number eight Dave Ewers impressive with ball in hand.

The visitors could and should have had a more comfortable lead at the break but the usually metronomic Steenson missed a trio of penalties after some impressive work from the pack.

Steenson did boot Exeter ahead after his first two efforts skewed wide, however the three points were immediately followed by a Gloucester try.

Thomas hit the gap from a sublime inside-ball from Billy Twelvetrees and dived over but it was the last time the hosts would trouble the scoreboard before half-time.

Instead Exeter powered ahead from another Steenson penalty from in front of the posts while White powered his way over from close in for a try.

Hoani Tui was denied a second try for the Chiefs by the video referee at the end of the first half after Sione Kalamafoni got his arm in front of the ball, to leave the half-time score at 13-5.

Exeter edged further ahead after the break with a third Steenson penalty, while England half-back Freddie Burns missed for Gloucester.

Tui was held up as Exeter sensed a further score, but captain Munn did enough to prise himself through the Gloucester defence for his side's second try.

May then had the pace and power to take in Burns's no-look pass and race through for a score that lifted the home crowd, before two further Steenson penalties settled Exeter nerves.

Elliott Stooke's try was chalked off for a knock-on but it would not have affected the result as Exeter recorded a third win of the season.

"The challenge for us was to bring our second-half performance against Leicester last weekend into today's game, and that is what we did. Our attitude was absolutely fantastic. It is all about attitude. If you get the attitude right, you can be a handful against any team.

"We started the Leicester game a little bit afraid to take them on because we didn't know whether or not it might put us under more pressure than clearing the ball long against them, whereas today when we made mistakes it was at the end of trying to do something.

"Mistakes will happen, you can live with that, but if you don't fire any shots then you have got to question what you are trying to do. We kept our composure and played a lot of good rugby. We had a platform across the team that allowed everyone to play today. We didn't create that against Leicester last week. There were some notable performances from the guys today.

"If you play hard and play fast, you will always have an opportunity to be in the game. A lot came off for us today, and massive credit to the players."

"As a pack of forwards, they will be disappointed, and I am disappointed with the way they performed. They were probably outmuscled in most facets, and that unity of the pack needs to come to the fore in the next couple of weeks.

"The pack will put its hand up and say today they weren't good enough and that they were off the pace. It hasn't consistently happened, and I expect a reaction. We've got to man up, front up, particularly in that area.

"Exeter are very good when they have got the ball. They had quick ball and front-foot ball for large periods, and they put us under huge stress. Consequently, they controlled the game."