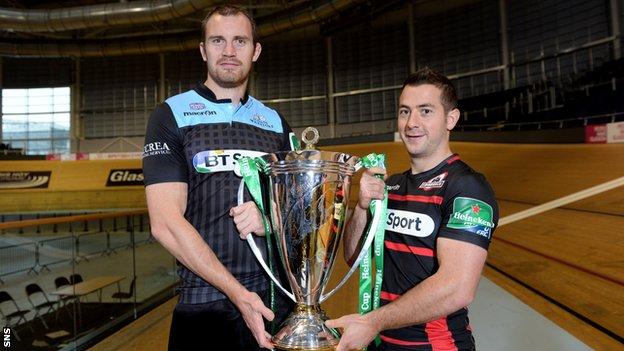 English and French clubs intend to quit the Heineken Cup next year in favour of the proposed Rugby Champions Cup.

While Dodson admits the implications of a split are "grave", he insists there remains time for dialogue.

He said: "I won't pretend it's not a serious financial issue for the SRU but there is still a lot of talking to do."

The SRU receives around £5m a year for Glasgow Warriors and Edinburgh participating in the Heineken Cup.

And European Rugby Cup (ERC), which has run the Heineken Cup since it began in 1995, wants to reopen negotiations.

English Premiership and French Top 14 clubs say they will not attend talks planned by the organising body next month.

They believe the Heineken Cup structure favours teams from the Pro12, which is made up of sides from Wales, Scotland, Ireland and Italy.

But Dodson believes there will be further talks and that agreement can be reached on a format that includes Scotland's two representatives.

"I remain very confident that there will be a European competition next season and that the Scottish clubs will be in that competition as long as it is in our interests to do so," he told BBC Scotland.

"I think it's been wrongly portrayed that we have been maintaining a position. That's not the truth.

"We have always been prepared to talk and meet with people to try and get this great competition back on track.

"Everyone has said they want to play in a competition where everyone is involved. That is our position and will continue to be our position."

The SRU has previously stressed that any competition must be supported by national governing bodies as well as the International Rugby Board (IRB).

"It's a high-stakes game for everyone," Dodson added.

"But the most important thing is that we have a period now where we can get down to negotiations.

"A lot of public statements have been made and we have been very keen not to get involved.

"We prefer to do our talking in private where it is meaningful and progress can be made.

"In the next two or three weeks people will get round the table again to make real attempts to get this thing solved."

Dodson was talking at the Scottish launch of this season's Heineken Cup, with Edinburgh opening their campaign against Munster on 12 October and Glasgow at defending champions Toulon the following day.