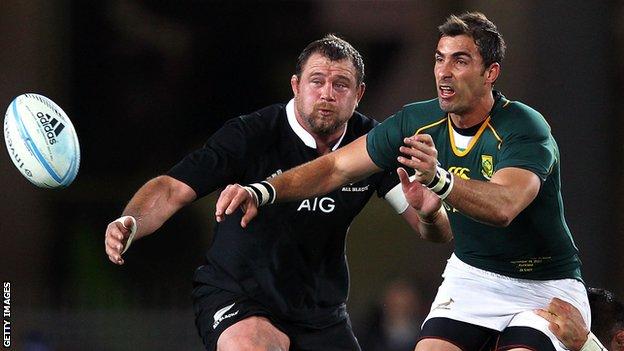 Battle lines have been drawn in the Ulster camp.

The final act of this season's Rugby Championship will unfold in Johannesburg on Saturday with New Zealand and South Africa contesting the title.

That showdown has made the good-natured rivalry between Ravenhill's set of Kiwis and Springboks a little sharper this week.

"There's quite a bit of competition between us," reveals captain Johann Muller, a member of South Africa's 2007 World Cup winning squad.

"There's the odd text message to each other on Saturday afternoons during the matches, rubbing results in. It's great craic and everyone really enjoys it."

The Springboks need a bonus-point win by more than seven points to wrestle the championship from the All Blacks.

"It's going to be really tough to get four tries against a wonderful All Black side but I've got no doubt South Africa will do it. I think it's going to be an absolute cracker of a game, I'm really excited," adds Muller.

Ellis Park has not always been the happiest of hunting grounds for The All Blacks.

It was the stage for one of their greatest disappointments, losing the 1995 World Cup final to the hosts. Their last visit in 2004 resulted in a 40-26 defeat.

Ulster coach Mark Anscombe, who hails from Auckland, believes the current World Champions are showing the form to take the spoils.

Heading into the showdown, Anscombe admits that his main concern is that Ulster scrum-half Ruan Piennar comes through this weekend's match unscathed.

Anscombe will not be upset by Pienaar's failure to make the Springboks starting line-up although the Ravenhill favourite is named on the bench.

"From a personal point of view, I don't care if he doesn't get too much game time because that means he'll come back fresher and hungrier to play for us next week," said Anscombe.

Pienaar is scheduled to return to Belfast on Monday as the province gears up for the start of the Heineken Cup campaign at home to Leicester Tigers on Friday.

The Ulster scrum-half could be on the receiving end of some taunts from Kiwis John Afoa, Nick Williams and Jared Payne if New Zealand retain their title.

Anscombe smiles, "There'll be a little bit of banter whoever takes the victory. I'd like to think the All Blacks will prevail again this week."