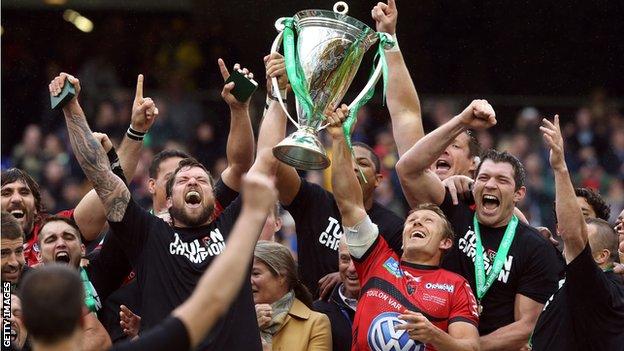 Ah, the I suspect the days of automatic qualification for both Scottish clubs, and three of the four Irish and Welsh sides, are gone forever. The current system is not fair.

I've always found the contrast between Celtic, and French or English rugby, very interesting. We obliterated our club game when professionalism arrived. It was cast aside.

There was an unseemly haste to tailor our game to the new world of elite level cups, TV money and overseas adventure.

That destruction of the club game was wrapped up with a need to control the players so that we might stay at the very highest levels of the international game.

The reasoning is sound. Fund the game in which your players play and their preparation is completely within your control. Six Nations and World Cup success should be easier.

It's called power. But it assumes that French and English players are prepared in a lesser way because they are controlled by clubs. Not an argument I have ever bought.

Did the English and French copy us? No, they kept their town-based club tournaments and strengthened it by providing cash the governing bodies could afford.

English and French rugby is based on dog-eat-dog leagues where relegation is as real as a late-night mugging and your position in the league dictates whether you sample the delights of a cool pint of European rugby and the soothing money it also provides.

Which is why even the Scots, Welsh and Irish must understand the current system is not fair.

Do I need to give a history lesson to younger readers?

In Scotland, we actually scrapped two of our district teams - the South and the North and Midlands (as they both used to be called) - to ensure our new "domestic" set-up of just two teams operated within affordable limits, and to slot into the new rugby landscape.

That, at the moment, consists of a Celtic league with no demotion called the Rabodirect Pro12 and the European Cup, for which there is automatic qualification for both Scottish sides.

In Wales, the great clubs of Cardiff, Neath, Ebbw Vale, Pontypool, Pontypridd and the rest were subsumed into the Welsh "regions" and the Irish merely diverted their cash into the existing four proud provinces.

The Celtic countries resource the game as it is in the Southern Hemisphere.

I've said in print before that I like real things. I loved coaching West of Scotland because it was all about promotion and relegation. I like the English and French leagues because they are so cut-throat you feel as though you are sitting in an old-fashioned barber shop during each game and the blood is all around.

Why is the current system not fair? Well, if success in the world is based on merit then it's not fair.

If we believe that getting a job shouldn't be about sex or private education, if a band makes it because they are good, or a golfer wins because he or she works the hardest, then bottom-of-the-table Edinburgh competing in the Heineken Cup instead of a mid-table French or English club is not fair.

I wish we had a town-based domestic league in Scotland, and the Welsh and Irish had theirs as well, and the top teams in the leagues clashed with the best players from other teams in Europe. Or we invented a British league.

But, despite the fact it would be so much cheaper for the governing Unions, it will never happen and I can understand that view as there is so much invested in the current set-up -

My guess is that the SRU, and possibly the Welsh and the Irish, in any up-and-coming European competition - should they keep a chair at the table.

They then have to move forward with less income. The SRU, I believe, receives £5m for its participation in Europe - enough to fund one team - and a guess would be that it might decrease if one team competes instead of two.

And then it has to choose which team to back, and perhaps pepper one team with better players, which is all very worrying for the weaker side, despite both captains - Al Kellock and Greig Laidlaw - saying on Wednesday that they welcome any up-and-coming meritocracy.

Nobody likes it when their income decreases - and