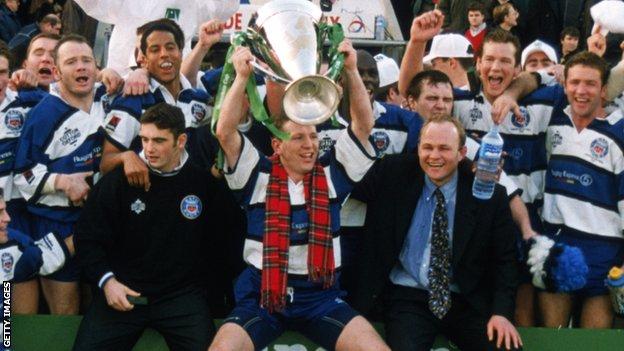 Professional rugby union in Scotland could end if there is no European competition next season, fears former national captain Andy Nicol.

English and French clubs intend to break away from the Heineken Cup and create their own tournament.

"It could well be the end of professional rugby in Scotland if the competition wasn't to go ahead," Nicol told BBC Scotland.

"I don't think you can fill a hole of that amount with anything else."

The Scottish Rugby Union currently receives about £5m per year for Glasgow Warriors and Edinburgh's participation in the Heineken Cup.

European Rugby Cup (ERC), which has run the Heineken Cup since it began in 1995, wants to re-open negotiations about the tournament's future but English Premiership and French Top 14 clubs insist they will not attend talks planned by the organising body next month.

They will quit the competition at the end of the season, citing factors such as their view that the Heineken Cup structure favours teams from the Pro12, which is made up of sides from Wales, Scotland, Ireland and Italy, and distribution of revenue.

Nicol, who won the Heineken Cup with Bath in 1998, insists that arguments over the tournament format is a repetitive issue and he hopes "common sense" will prevail for the good of the game in Scotland.

"It happens every few years," he told BBC Scotland. "The English and the French flex their collective muscles when the contract is coming to an end.

"But this year, it's very different, because they've got a television deal on the table and it's a real clear and present danger.

"I think there's an acceptance that the current format of the Heineken Cup will cease and there will be a new competition.

"Then we just need to ensure and hope that Scotland are heavily involved in it."

Nicol conceded that the main stumbling block for advancing discussions was the perception that Celtic nations are favoured in the qualification process.

At present, Ireland and Wales each have three sides guaranteed a place, while Scotland and Italy have two apiece.

Nicol believes the English and French unions want to put a stop to automatic qualification, which could bring about the end of lucrative revenue for Glasgow and Edinburgh, although ending guaranteed entry may be necessary to ensure the future of a pan-European competition.

The former Scotland captain said if the tournament comes to an end it would be "a sporting disaster" adding that "the Heineken Cup has been a fantastic competition".

He added: "Where it's flawed is in the qualification. I don't think the two Scottish sides and the Italian sides or the Irish sides should qualify automatically.

"So let's get qualification sorted out and based on a meritocracy and then the distribution of revenues is for the boardrooms.

"There's a bit of posturing from both sides, but I just hope it's a bit of brinksmanship and they get around the table and sort something out - and we get a competition.

"It might not be the Heineken Cup as we call it now, but hopefully we'll get something like it."