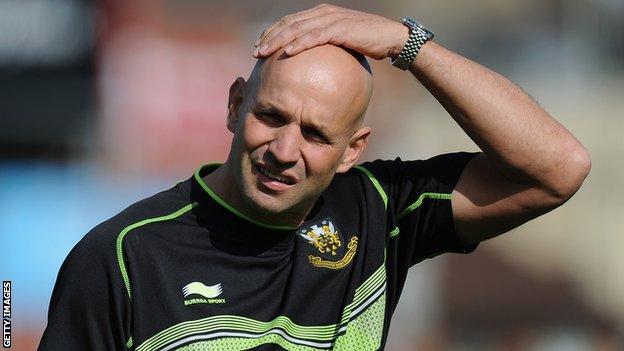 Northampton director of rugby Jim Mallinder says rivals Leicester save their best for when they face his side.

The East Midlands teams meet at Welford Road on Saturday for the first time since May's Premiership final.

"I honestly think Leicester pick themselves up to play better against us," Mallinder told BBC Northampton.

"You only have to look at their recent games. Every single player seems to step up to the mark and we have to do that to match up to them."

at Twickenham, after Mallinder's side were reduced to 14 men following Dylan Hartley's red card.

Encounters between the teams are generally heated, but Leicester have maintained an edge over the past two seasons, winning each of their last eight meetings in all competitions.

"We've got to get our discipline right. You don't want to go down to 14 men," added Mallinder, whose second-placed side are level on 15 points with Richard Cockerill's Tigers.

"We've done that in the past at Welford Road and once that happens, particularly if you're down to seven in the pack, it can have a massive influence on the game.

"We know that the game is not going to define the season.

"But if we can go up there and get a result it will be a really good marker for us."