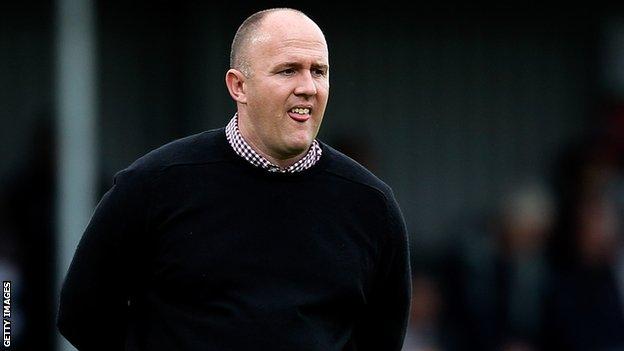 Cornish Pirates coach Ian Davies says he is happy for his side to be regarded as strong favourites for Friday's clash with Moseley.

The Pirates have won two out of three games this season, while Moseley are still seeking their first .

"We should be favourites at home against them and we've done well against Moseley at home for the last few years," he told BBC Radio Cornwall.

"But we have to know we're up against a decent side with a lot of experience."

Moseley recovered from 31-6 down to draw 34-34 with Plymouth Albion, a result which Davies says shows their attacking prowess.

We have worked hard this week on tightening up our defence

"They have real pace out wide so we've got to control the ball," he added.

"It could be an entertaining game. They've scored a lot of points early on and we've focused on our attack in training so it could be high-scoring.

"They never give up and are always chasing the bonus point and looking to attack."

Davies has selected winger Mike Pope and fly-half Angus Sinclair to make their first starts in the Championship. Tom Channon will start at hooker, with Aaron Carpenter dropping back to his more familiar position at number eight.

Meanwhile, Laurie McGlone will move up into the second row, while Joel Conlon starts at open-side flanker.

Moseley coach Kevin Maggs said his team had been concentrating on their work without the ball after shipping 47 points against Rotherham Titans last weekend.

"We have worked hard this week on tightening up our defence, but I also need to see our players show greater competitiveness at the break-down," said the former Ireland centre.