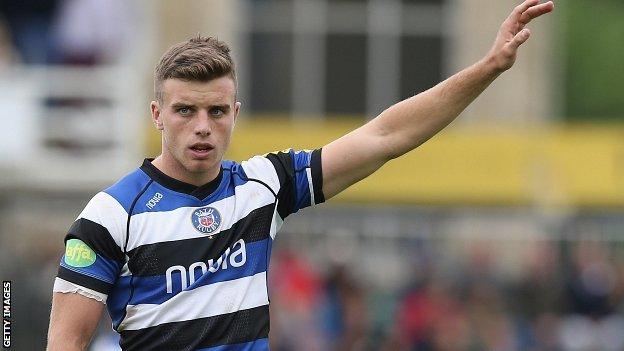 The new season may be only a month old, but it is only another four weeks before England play their first autumn Test against Australia on 2 November.

Bath to win at Sale

Harlequins to win at London Irish

Newcastle to win at Worcester

This weekend sees the last round of Aviva Premiership fixtures before Europe takes centre stage with the first two rounds of Heineken Cup and Challenge Cup pool matches over the next fortnight.

Chances to advance claims for international selection are at a premium before the Wallabies, Argentina and New Zealand head to Twickenham next month.

Jeremy Guscott assesses some of the key decisions facing England head coach Stuart Lancaster as he prepares to name his squad for the November Tests on 16 October.

Who holds the keys to number 10?

George Ford has been very impressive in the opening four weeks of the season for Bath. The composure he has shown is way beyond his 20 years of age.

He's been talked about as a possible future England fly-half, and when you look at how his stats measure up against the other likely 10s (Owen Farrell, Freddie Burns and Toby Flood, who has only played two games so far), Ford is holding his own.

His kicking could be better; Farrell is the ace in that department. What will impress the England selectors is Ford's defence (81%).

Bath's change in playing style is shown in Ford's carrying and metres run stats, and his ability to take on and beat defenders is very evident. Personally I think Ford will continue to impress. His all-round skill-set is quality; combine that with an assured level-headedness and you've packaged a good fly-half.

The other three 10s are miles ahead when it comes to experience in first team matches but form should be the prime selecting key performance indicator (KPI) for England head coach Stuart Lancaster.

Can anyone dislodge Robshaw at open-side?

Chris Robshaw has continued to perform at the highest level and spent the pre-season getting himself in top shape ready for the fight to keep his place at seven and the England captaincy.

Questions are asked about Robshaw's suitability to play at open-side. It's a fair question, but last season I believe he more than held his own in the Premiership.

If an out and out open-side materialised and out-performed Robshaw, then he would get the nod. I don't believe Stuart Lancaster is naive enough to select a player for his captaincy ability above his playing ability.

For me winning, and not conceding, turnovers are game-changers as well as conceding penalties, or picking up yellow cards. No-one as yet is making a huge case to be picked ahead of Robshaw in the England starting line-up so he should stay.

If Marland Yarde continues to impress as much as he has so far this season, then he will definitely go on the tour to New Zealand at the end of the season.

He showed a little immaturity and hot-headedness when scoring a try against Worcester. Ignacio Mieres jumped over him as he scored and only just brushed him, and Yarde reacted unnecessarily in my view.

How you handle yourself will have a big effect on national squad selection. The squad culture doesn't have to fit you - you have to be right for the environment already in place.

Thankfully it's his rugby that's being talked about, and Yarde is top try-scorer in the Premiership alongside Dave Strettle, who also has four tries. The competition for right wing is savage; you have Chris Ashton and Christian Wade, plus Charlie Sharples.

We can see from these mostly attacking stats that Yarde is holding his own; he just needs to work more on bringing others into play by passing a bit more. I believe Yarde has great potential and if his attitude is right he could be England's next right wing.

I don't yet see a lot of competition for Billy Twelvetrees to start at 12 for England during these autumn internationals.

Kyle Eastmond could have made a strong case but his early-season injury will not give him enough high-level competition to beat Twelvetrees to the slot.

Twelvetrees has the physical make-up to be a threat in attack and defence plus the handling skills and vision to put others in space.

The exit strategy of teams is so important, and Twelvetrees' boot would be a valuable addition to that of a nine and 10 in getting out of your own half.

I believe Eastmond is pretty peerless when it comes to broken-field running and he would be one of the few backs who have genuine acceleration that would embarrass a forward defending in the backline, a true mis-match if ever there was one.

Luther Burrell's name keeps cropping up which is good news; the more competition the better.

Bill or Ben at number eight?

When Saracens' Billy Vunipola gets the ball in his hands, you can't help but get excited because he's big, explosive, quick for a forward and loves the physicality of man-on-man.

Players like Billy don't come along in this neck of the woods very often. He is genuinely difficult to contain; a player of his size and pace has to be brought down early and that's easier said than done.

For a big fella he's got some moves off his feet and can handle a ball well. Personally, he would have to be in my match-day squad of 23, he's that good. Gloucester's Ben Morgan is pretty much his only competition and he's another great attacking force.

This is going to be one of the big decisions Stuart Lancaster makes leading up to the 2015 World Cup: who does he pick out of these two?

The one player picked on the bench would always have a brilliant impact, but having both starting could be difficult to accomplish with Tom Wood likely to be at number six for England. It will be truly interesting to see which way Lancaster opts to mingle these talents.