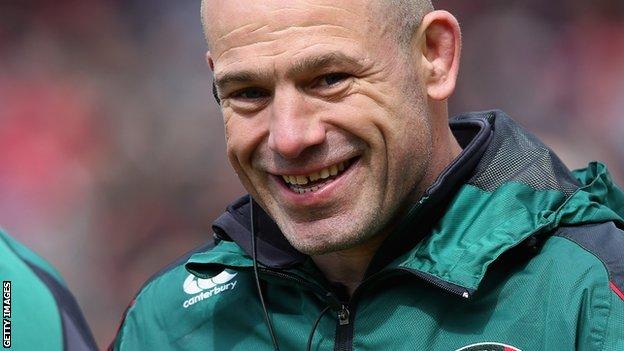 Cockerill, a former Leicester player, has been permanent boss since 2009 and only signed his last deal in May 2012.

Cockerill said: "This club has been a huge part of my life for a long time and has a unique place in club rugby."

I am very passionate about the Tigers and in wanting to continue the club's success. This is a tough environment but it brings out the best in people

He returned to Welford Road as part of the coaching set-up in 2005 and has been in charge since 2009 following two separate spells as acting head coach.

"I am very passionate about the Tigers and in wanting to continue the club's success," Cockerill added.

"We talk a lot with the players and staff about loyalty and commitment to the club, and that is something I feel strongly about too so I'm very happy to be able to agree a new contract here.

"This is a tough environment but it brings out the best in people."

Tigers chairman Peter Tom CBE said: "Cockers played for the club and is very much part of the Tigers family. He knows all about the Tigers culture and how to be successful here both as a player and a coach.

"Stability and continuity are extremely important in any successful organisation and, given the challenges of player availability, injury, selection, recruitment and the general ups and downs of professional sport, we see him as the man to continue to drive the team forward."