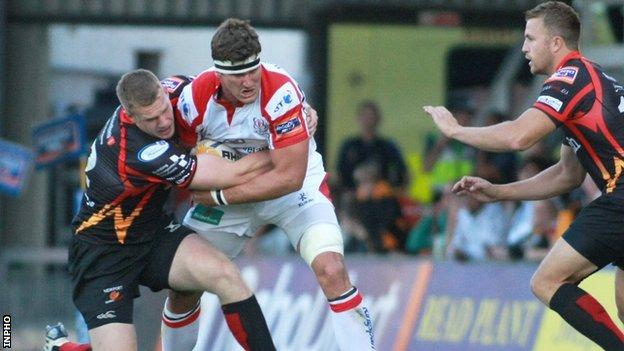 Robbie Diack has signed a three-year contract with Ulster which will see him remain at the Irish province until at least the summer of 2017.

The back-row forward joined Ulster from the Stormers more than five years ago and has become an important member of Mark Anscombe's squad.

Diack made his 100th appearance for the side against Cardiff Blues in May.

Born in Johannesburg, the 27-year-old is qualified to play for Ireland through residency.

Diack was part of the Emerging Ireland squad which competed in the Tbilisi Cup in the summer.

"This wasn't a difficult decision to make. Ulster Rugby is an exciting place to be at the moment," commented Diack.

"We have made huge progress as a team, we have a new stadium and excellent facilities. I just want to play my part over the next three years and help Ulster pick up some silverware."

The news that Diack is to remain at Ravenhill comes as a further boost following the news that New Zealander Nick Williams has agreed a new two-year deal.