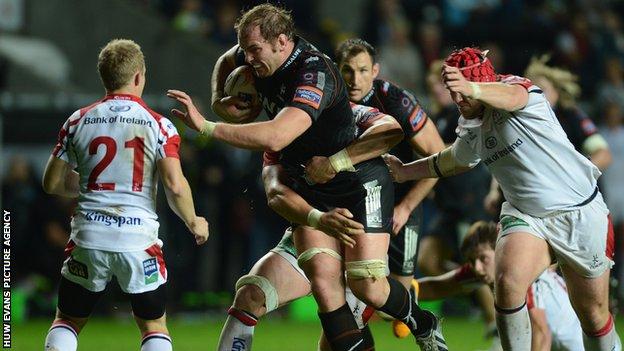 Captain Alun Wyn Jones was disappointed after Ospreys surrendered a 12-point lead on their way to a home defeat against Ulster.

Visiting fly-half Paddy Jackson kicked six out of six penalties as Ulster beat the Welsh region in Swansea for the second time in two seasons.

Jones said he felt the players had let a bumper 10,000-strong crowd down.

"I'm bitterly disappointed that they all came out and we didn't get the win," he said.

"It was probably a bit entertaining at the end but we came up short."

Ospreys led 12-0 after 44 minutes, but saw their indiscipline punished by Jackson, who like Ospreys' Dan Biggar did not miss a kick at goal.

The result put an end to Ospreys' unbeaten start in this season's Pro12, following wins over Treviso, Edinburgh and Connacht and a draw at Leinster.

"On the whole I thought we were decent enough in the first half although we defended really well we were probably too comfortable defending, didn't get much attack going until the second half.

"It was probably a dream start [to the second half] with two quick penalties, but then obviously they came back into it and got the end result.

"We'll probably have to have a look at our set piece. It didn't function but we still had a lot of possession."

Ospreys' next game is against Leinster in the Heineken Cup in Swansea on Saturday, 12 October.

Jones believes that gives his team an early chance to wipe-out the effects of the loss to Ulster.

"It's been a much better start than last year and puts us in good stead but we can't come off the gas," he said.

"I'm bitterly disappointed with the way we didn't get the win today but, pardon the cliche, we've got one next week to put it right."