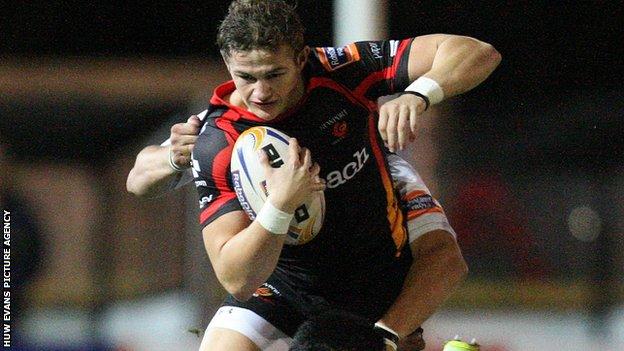 The Men of Gwent have won all three home games - against Ulster, Scarlets and Zebre - in this season's Pro12.

Amos, 18, crossed for two of the Dragons' three tries in the 30-7 home win over Italian outfit Zebre on Friday.

"But it is great for us and great to get another win here.

"It's such a good win, a good feeling and continues our home record in the league."

Amos is highly-rated by the Dragons and signed a three-year deal with the region in 2012.

He has been tipped to follow in the footsteps of Dan Lydiate and Toby Faletau and gain Wales honours.

Amos, already a Welsh Under 20s international, admitted the Dragons were wary of the threat posed by a Zebre side who beat Cardiff Blues 30-25 on their last trip to Wales.

"We were a bit wary after the Blues a couple of weeks ago, and with them getting a bonus point against Glasgow," said Amos.

"But it was a good team performance and shows how far we have come that we are disappointed we didn't get the bonus point."

The 18-year-old Amos scored a try in each half for the Dragons, with flanker Lewis Evans crossing for the home side's third try.

He paid tribute to Wales and British and Irish Lions number eight Faletau for his performance and the break which led to Amos' second try.

He also praised the influence of new signing Netani Talei since his arrival in Wales from Scotland.

"It was really good from the team and we are really pleased to get the win," said Amos.

"They were two of the easiest tries I will ever score, with a combined distance of a metre.

"The first one was great work by Netani and the second one was all Toby.

"You can see why he was star with the British Lions. He is such a good player and brings so much to the game in attack and defence and it's really good to learn off and pick up tips from him."