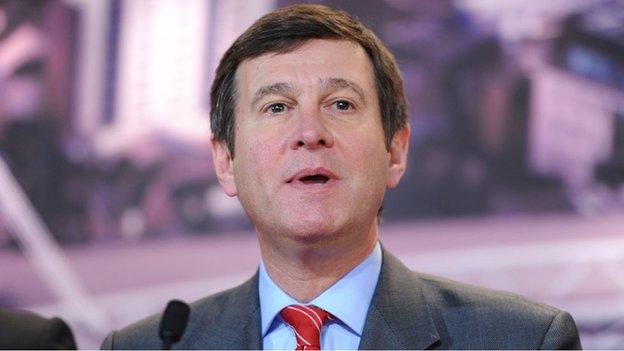 Welsh Rugby Union chief Roger Lewis has warned of dire consequences for the game in Wales unless the future of European rugby is resolved.

English and French clubs will quit the Heineken Cup next year, and BBC Wales understands the Welsh regions want to know the likely outcome before they enter a new agreement with the WRU.

But a new contract is due to be signed by both parties before the end of 2014.

"Without that there's no certainty for the regions and... ourselves," he said.

The agreement is a contract which sets out - among other things - which tournaments the regions play in, how many foreign players they are allowed and the amount of money they will be paid by the WRU.

Speaking on Scrum V, Lewis said the regions and the WRU had agreed the timetable and felt that both parties ultimately want a new deal and would agree the contract.

However, he warned that if the contract was not signed then it could, in extreme circumstances, mean the end of regional rugby.

Lewis also said he understood the regions' position on needing to know what tournaments would be available next year before committing to a new agreement.

"Everyone needs to model their businesses and manage their risk accordingly," he said.

"Risk has been taken as I say, the Cardiff Blues have signed Gethin Jenkins in this context, they have laid a new pitch and I think the negotiation for certain players needs to be concluded as quickly as possible.

"And yes, a million pounds is available and we want that to be spent as quickly as possible."

Asked what was causing the delay, Lewis confirmed the regions had not yet agreed the way forward.

"At the moment we are waiting to hear back from the four regions, we met with them last week, we outlined our joint views on players and those views were arrived at between discussions with the regions and the Welsh Rugby Union coaching staff.

"And we've also expressed the clear terms and conditions, and one of them... is the participation agreement.

"We agreed with the regions in 2009 that the new agreement going forward would be signed between July of this year and December of this year, and it would continue on the same terms and conditions from next year, 2014 through to 2019.

Questioned about what that would mean in practical terms for the regions, Lewis gave a stark assessment.

Regional Rugby Wales, the body which represents the four Welsh regions, is understood to be seeking clarification on how the WRU will fund the regions if the English and French clubs' breakaway goes ahead.

It also has concerns over WRU proposals to centrally contract Welsh international players.