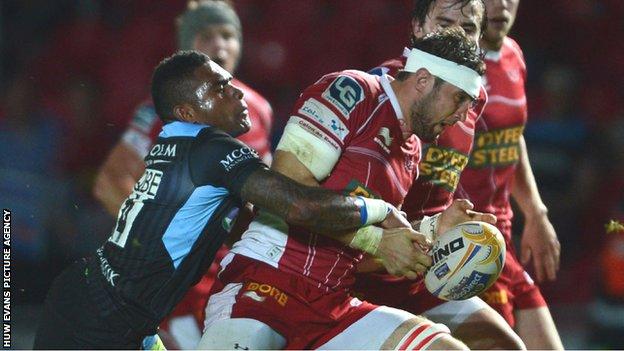 Scarlets coach Simon Easterby felt his side lacked composure at crucial times during their 17-12 defeat by Glasgow.

The Scottish visitors maintained their 100% record in the Pro12 in spite of twice being reduced to 14 men in the second half at Parc y Scarlets.

"We lost our composure a little bit in the latter stages of the game," said Easterby.

"We had opportunities to score more than just three points and we just didn't take those."

Scarlets were outscored two tries to nil, but kept in touch thanks to the boot of fly-half Rhys Priestland.

He kicked three penalties to get them back to 14-9 early in the second half, and after he suffered a slight injury Jordan Williams also kicked a penalty to get the Scarlets back to within two points.

Williams was also involved in two other crucial moments.

He had the try line at his mercy when he chose to pass to full-back Liam Williams, who was held up short.

And he narrowly missed a late penalty after man-of-the-match Niko Matawalu was yellow-carded with six minutes remaining.

However, Easterby blamed a collective lack of coolness under pressure for the defeat.

"I suppose you have to credit Glasgow for the way they played, but also we'll be disappointed a little bit in some of our composure and accuracy in particular in that first half," said the former Ireland international.

"It was disappointing really because we played some good stuff at times, but we just didn't get that final pass or missed a couple of tackles which allowed them to get a bit of momentum."