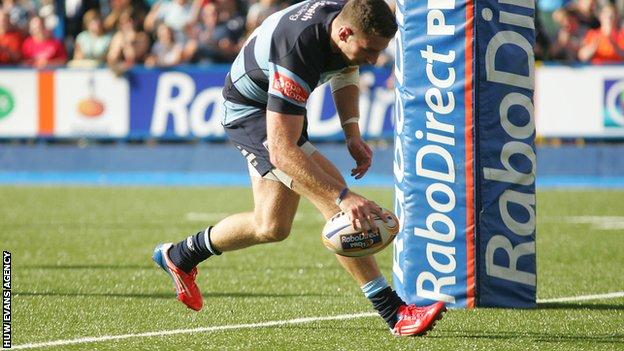 Wing Alex Cuthbert says Cardiff Blues' victory over Edinburgh was a boost ahead of their Heineken Cup campaign.

The Wales and British and Irish Lions wing crossed for two tries in the 29-12 win over Edinburgh in the Pro12.

The Blues open their Heineken Cup Pool 2 campaign with a trip to Exeter on Sunday, 13 October.

"Hopefully, this can kick-start our season and it's a good confidence boost going into the Heineken Cup," said Cuthbert.

"We got what we wanted and that was the win. The main aim was to get a win and to try and put a performance in as well.

"We built and the first half was a bit slow for us but we got our rewards in the second half.

"We showed a little of what we can do against Leinster last weekend. We wanted to carry that on and go one step further and get a win, which we did.

"It was a good performance and we are all confident and need a good training week going into the Exeter game."

The Blues have managed only two wins in their opening five games and became the first team to be beaten by new Italian outfit Zebre in the Pro12.

Coach Phil Davies saw his side bounce back with an improved display in Dublin in the 34-20 defeat to Pro12 champions Leinster.

Now the Blues turn their focus to Europe for the next few weeks and they are in the same pool as the Chiefs, Glasgow Warriors and reigning Heineken Cup champions Toulon.

Cuthbert is looking forward to his personal duel with former Blues winger Tom James, who now plays for the Chiefs.

"I have watched them a little bit over the last couple of weeks and they have a good forward pack and have the likes of Tom James on the wing," said Cuthbert.

"He is playing well for them and, if selected, it will be a good battle with him.

"We have to do some homework this week, but just think about ourselves and what we can do in the game."