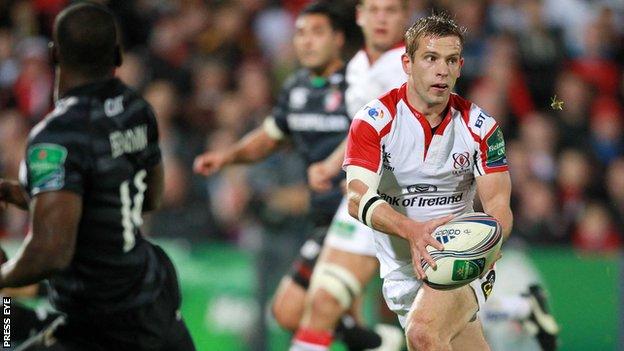 Ulster recovered from conceding an early Logovi'i Mulipola try to beat Leicester in their opening Heineken Cup match at Ravenhill.

Prop Mulipola got over in the corner and skipper Toby Flood converted to give the English club a 7-0 lead.

Fly-half Jackson kicked five penalties as well as the conversion for a match tally of 17 points.

Leicester were always in contention and secured a losing bonus point when replacement Owen Williams landed a penalty with the last score of the night.

The Tigers have now lost all three European matches they have played at Ravenhill.

But they made a good start when Mulipola touched down in the right corner after a neat break by Flood, who also added the excellent conversion.

Ulster struck back when Jackson delivered a marvellous cross-kick which Bowe superbly took ahead of Niall Morris.

Jackson then calmly converted from the left wing and the sides were level, but not for long as Flood then landed his first penalty after Ulster went in at the side on a Tigers's line-out maul.

Jackson restored parity after Julian Salvi was penalised at the breakdown, then just before half-time a break from home scrum-half Paul Marshall led to Leicester conceding on their own line and Jackson gave the home side a 13-10 half-time lead.

Flood brought the Tigers level again after Jackson had been judged offside - and then Ulster had a Darren Cave try ruled out by the TMO for a forward pass in the build-up.

Leicester were not helped by the 58th-minute sin-binning of Jordan Crane for interfering with substitute Ruan Pienaar - with Jackson kicking three penalties while the number eight was off the pitch to put Ulster 22-13 up.

With the visitors now out of bonus-point territory, and with skipper Flood substituted, they needed to score next and replacement fly-half Owen Williams kicked the last penalty to make it 22-16.

Ulster now face a daunting trip to in-form Montpellier on 19 October, a day after Leicester host Treviso in Pool Five.

"They might be happy with a point but our objective was to get four points and we achieved that. Each game we play that is our objective and if we stick to doing that we'll come through.

"We're happy with the four [points]. There are only six games and you have to win your home games and we have won our first one. We'll enjoy that and then we'll start to think about our trip to France [to face Montpellier] next Saturday."

"Any point at Ravenhill we're really pleased with - it is a difficult place to play.

"Previous years have proven if you don't win your away games you need to pick up a bonus and we did that. It is probably what we deserved out of the game after going nine points down.

"The resolve and the character we showed to get ourselves back - and for Owen to kick that penalty to get us that bonus point - was an outstanding effort from everyone."