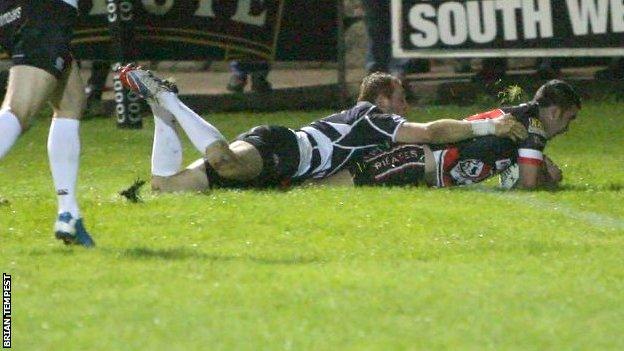 The Pirates scored four tries for the second week in a row to wrap up a bonus-point win and move to fourth in the Championship table.

Going down to 13 men wasn't part of the plan

"We're a young side and the energy and enthusiasm is good. It's a happy camp - even I'm happy which is quite unusual!"

The Pirates were down to 13 men for a spell during the second half, with both Alex Cheeseman and Aaron Carpenter sin-binned by referee Simon Harding.

But the Pirates restricted the score to just 3-3 during their time with 13 players, an aspect of the performance which particularly impressed Davies.

"Going down to 13 men wasn't part of the plan but when they came back on the pitch we got the control and we were good value for the win," said Davies.

"The boys defended really well throughout the game but to just concede three points in that period was testament to the efforts of the players on the field.

"We looked dangerous with ball in hand, but we just needed to find that control."

Davies said he would have to wait on news of centre Junior Fatialofa's injury, with the 32-year-old coming off before the end of the match after a bruising encounter at the Mennaye Field.