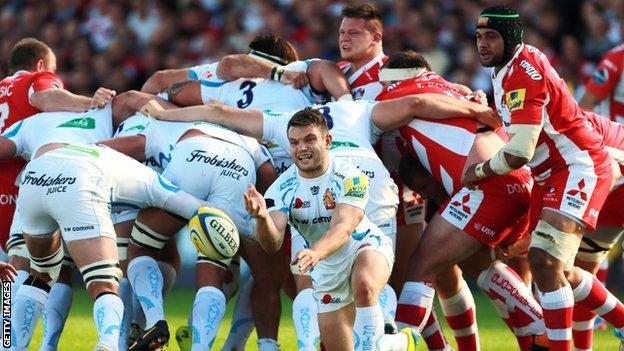 Nigel Davies expressed concern at the performance of the Gloucester forwards after their defeat by Exeter.

The Chiefs eased to a 29-12 victory at Kingsholm on Sunday and moved up to sixth in the Premiership, while the Cherry and Whites slipped to 10th.

Gloucester had won their two previous league matches but director of rugby Davies told BBC Gloucestershire: "I expect a lot more from us.

"The scrum was a concern at times and has been for the last couple of games."

He continued: "As a unit they are not performing. The personnel can look vulnerable when they're not working as an eight and right now that's what's happening.

"Their unity is vitally important and the early clips I've seen suggest that this is our biggest problem."

Gloucester had produced two memorable wins against Northampton and Newcastle - in which they came from behind in both - but failed to provide a serious test for Exeter.

"We were well beaten by a very good team," admitted Davies. "They controlled the game for virtually 90% of it.

"That was probably one of the best performances we've faced since I've been in the job. Credit to them for getting their game right."

Gloucester now have a two-week break from the domestic league as they begin their Heineken Cup campaign with games at home to Perpignan and away at Munster.

And Davies says his side, who finished fifth in the Premiership last season, will come back stronger from their poor performance.

"There's always work to be done," he added.

"I spoke to the boys after the game and it's all very well putting words in front of people but the emotion that we feel will spur us on."