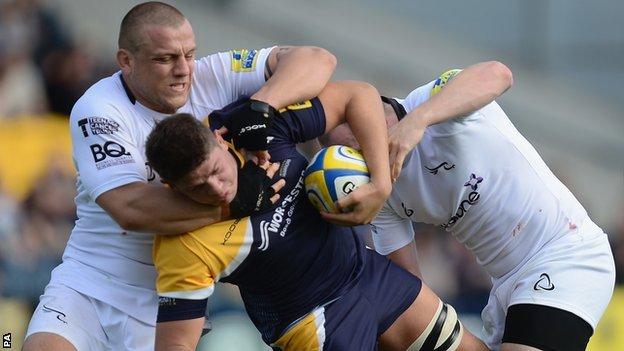 Worcester stand-off Paul Warwick says the start of their European Challenge Cup campaign at Oyonnax this weekend could not have come at a better time.

After five straight defeats, the Warriors sit bottom of the Premiership.

But close-season recruit Warwick admits flying off to eastern France can help to relieve the growing pressure.

"Europe has come at a good time for us. We can regroup for the second phase of the Premiership," the Australian told BBC Hereford & Worcester.

"We're not naive enough to think we can challenge at the top of the table but we've let two games go, against London Irish and Newcastle, and that puts in a different space."

Worcester's five straight league defeats - coming on top of the five losses with which they finished last season - have left Dean Ryan's side seven points adrift at the bottom of the table.

Now they face their first two Challenge Cup ties, flying to Geneva for this Saturday's short trip across the Swiss-French border up into the Jura mountains to Oyonnax (17:30 BST), followed by next Saturday's home game with Premiership rivals Sale.

But, if they lose again when they return to Premiership action at Exeter on 26 October, they would equal the 11 straight defeats suffered by London Welsh last season, the worst run of results in English domestic rugby since Rotherham went through the entire 2003-04 season without winning a game.

"We've got a lot of work to do," admits Warwick.

"The group believes in what we're doing but it's not coming on to the pitch."

Worcester still have three Argentines to bring in, summer signings Agustin Creevy and Leonardo Senatore, along with recently-recruited fellow international Mariano Galarza, now their involvement in the southern hemisphere's Rugby Championship has come to an end.

"We've got the Argentines back in the coming weeks," said 32-year-old former Munster star Warwick. "Hopefully the public will see a different Worcester after this European break."

Warwick is not yet up to full match fitness, having only made his debut as a 52nd-minute substitute for Ignacio Mieres in Saturday's 16-11 home defeat by promoted Newcastle.

But Worcester know they need their strongest possible squad available and, with centre Alex Grove having also returned at the weekend after missing the start of the season, the reinforcements cannot come soon enough.

"We can't buy a win at the moment," said Worcester director of rugby Ryan.

"I know the history of this place and all the last-minute decisions that have gone against us. But there's other things we can do better in the first 79 minutes.

"If we can get better at things we can control, we have a better chance of winning games."