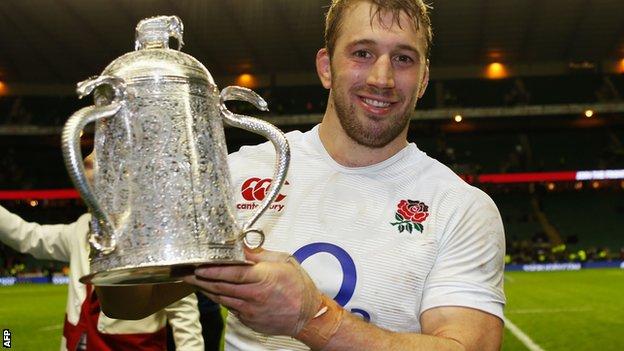 Harlequins flanker Chris Robshaw should be named England captain for the autumn internationals, according to Quins director of rugby Conor O'Shea.

Robshaw, 27, has skippered England 16 times, but Northampton flanker Tom Wood, captain during the summer tour of Argentina, is another option.

"I have no doubt that when it is picked, Chris will be England captain," O'Shea told BBC Radio 5 live.

Harlequins are seventh in the Premiership table after three defeats in their opening five matches, but O'Shea feels that should not count against Robshaw.

"I'm sure in the world we live in everyone will say 'well, look at the start to the season Quins have had', but we are six points off second, so it's not an insurmountable mountain we have to climb," added O'Shea.

"Chris is in great shape and great form. I can't think of anyone else."

Head coach Stuart Lancaster is expected to announce the captain when England meet for a training camp on 21 October.

Wood, 26, helped England win 2-0 in their summer series against Argentina, while Northampton hooker Dylan Hartley, 27, and Leicester lock Geoff Parling, 29, have also been mentioned by Lancaster as contenders for the captaincy.

"Chris Robshaw has done a great job thus far and Tom Wood did a great job in Argentina having not captained his club side before," Lancaster told BBC Radio 5 live.

"Dylan Hartley has done it for us. Geoff Parling stepped up as a key leader on the Lions tour, and both [England assistant coaches] Andy Farrell and Graham Rowntree felt he showed captaincy material.

"But Chris has done a brilliant job so far and definitely hasn't let us down."

England meet Australia on Saturday, 2 November, play Argentina a week later and then face New Zealand on 16 November, with all three matches at Twickenham.